AirAsia should push on with reforms

These are highly favourable parameters for AirAsia and form the basis of our earnings and call upgrades.

AirAsia will deliver solid earnings from second quarter of financial year ending Dec 31, 2015 (2QFY15) as the benefit of lower fuel price trickles in.

The weaker ringgit against the dollar will offset some of the benefit as 60% to 70% of its operating costs are denominated in dollars. However on a net basis, it is still favourable and we raise our FY15 earnings by 24.4%.

The current cost environment is conducive for the company to push on with its reform initiatives. Idle aircraft can be reinstated into service, and selling excess aircraft is attractive because the strong dollar will translate into higher value in ringgit terms.

This should also enable its associates to pare down its debts (RM2.275 billion as at end 3QFY14) and replenish AirAsia’s cash levels.

Upgrade to “buy” (from “hold”), with a raised TP of RM3.25 (from RM2.60) on positive earnings revision. Our TP is premised on an unchanged 11 times FY15 price-to-earnings ratio, which is on par with global peers. — Maybank Investment Bank Research, Dec 15 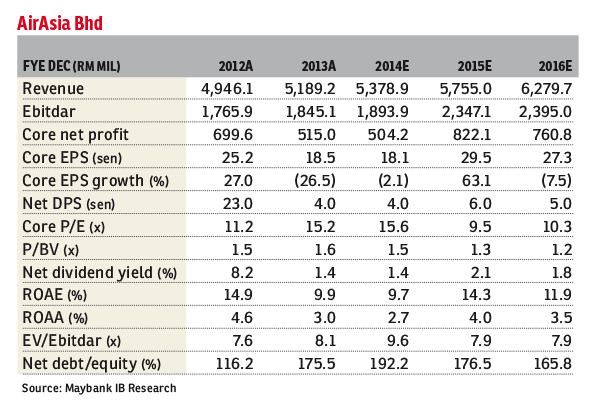 This article first appeared in The Edge Financial Daily, on December 16, 2014.