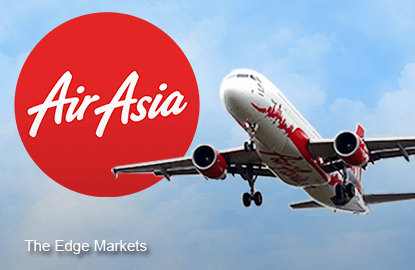 KUALA LUMPUR (July 27): AirAsia Bhd shares were actively traded today and rose as much as 4 sen or 3% to RM1.44 on a "flow of good news" from the low-cost airline, according to an analyst.

The stock was the 13 most actively traded on the exchange and the current price gives it a market capitalisation of RM3.98 billion.

In a Reuters report earlier, AirAsia Bhd group chief executive officer Tony Fernandes said the group will recapitalise its 49%-owned Indonesian associate PT Indonesia AirAsia (IAA) so that the unit can meet a rule set by the country’s transport ministry.

The report also quoted Fernandes as saying that IAA has submitted a plan to boost shareholder’s equity ahead of a month-end deadline.

To recap, IAA had received a directive from Indonesia’s ministry of transport that it has to ensure a positive equity position by July 31, 2015, of which a failure to comply will result in suspension of its operating permit.

In a separate development, AirAsia said it has signed a collaboration agreement with maintenance, repair and overhaul (MRO) services provider Destini Bhd, under the budget airline’s proposed outsourcing of its aviation services to Destini.

According to Fernandes in a statement, the outsourcing is expected to reduce AirAsia’s cost by about 10%–15% per annum.

Additionally, AirAsia, along with its long-haul low cost affiliate AirAsia X Bhd announced a special 20% off base fares on seat and flights in a one-week exclusive offer ending Aug 2, 2015 for immediate travel from July 28 to Nov 30, 2015.

The special offer is in anticipation of its 300 million guests flown milestone.

Maybank IB Research aviation analyst Mohsin Aziz said this bout of good news is welcome to AirAsia investors following a string of negative news from the group of late.

“Any good news from the group at this point will provide a booster to its share price,” he told theedgemarkets.com.

AirAsia shares, which were trading at RM2.10 on June 9, had fallen as much as 20% to RM1.67 on June 18 following a June 10 report from Hong Kong-based GMT Research that questioned the airline’s accounting, profit generation, cash-flow issues, leverage and group structure.