AirAsia to raise up to RM1b through sukuk, half of proceeds to fund aircrafts purchase 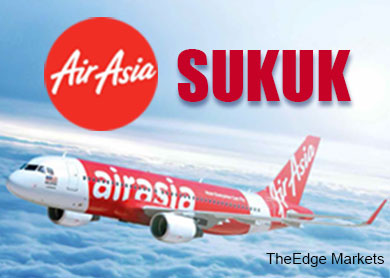 KUALA LUMPUR: AirAsia Bhd has proposed to establish the Sukuk Mudharabah Programme of up to RM1 billion in nominal value, as part of its funding plan, where up to 55% or RM550 million shall be utilised to part finance its capital expenditure (capex) requirements.

In a filing today to the stock exchange, AirAsia said the capex requirements were pursuant to, without limitation, its aircraft purchase programme – where deposits and/or contributions are required for the transaction and purchase of the relevant spare parts.

The proceeds raised from the Sukuk Mudharabah Programme – the unrated subordinated perpetual sukuk based on the Shariah Principle of Mudharabah – shall be utilised by AirAsia for Shariah-compliant purposes, said the low cost carrier.

It also said the Securities Commission Malaysia (SC) has approved of the establishment and issuance of Sukuk vide its letter on October 29, subject to compliance with the relevant requirements pertaining to the implementation of the Sukuk stipulated under SC’s guidelines on Sukuk revised on and effective from August 28.

Meanwhile, AirAsia said RM300 million has been set aside to refinance its banking facility granted to the issuer.

Other utilisation of proceeds include up to RM2.5 million in estimated expenses relating to the Sukuk Mudharabah Programme, with the remaining balance to be utilized for Shariah-compliant working capital purposes to support its business operations, administrative and operating expenses.

“These [working capital] include meeting aircraft maintenance reserves and deposits for fuel hedging and fuel payment and other hedging activities which include but are not limited to foreign currency and interest rate hedging,” AirAsia said.

“For the avoidance of doubt, the proceeds would exclude working capital requirements related to financial services or other businesses which are Shariah non-compliant,” it added.

The Sukuk Mudharabah is perpetual in tenure, where AirAsia has a call option to redeem it at the first call date – which is at the end of the fifth, seventh or tenth year to be determined prior to issuance – and on each subsequent periodic distribution date thereafter.

Also, the Sukuk Mudharabah will not be rated, and payment obligations on it will at all times rank ahead of other share capital instruments or security for the time being outstanding, but junior to the claims of all other present and future creditors of AirAsia (other than obligations ranking pari passu with the Sukuk Mudharabah).