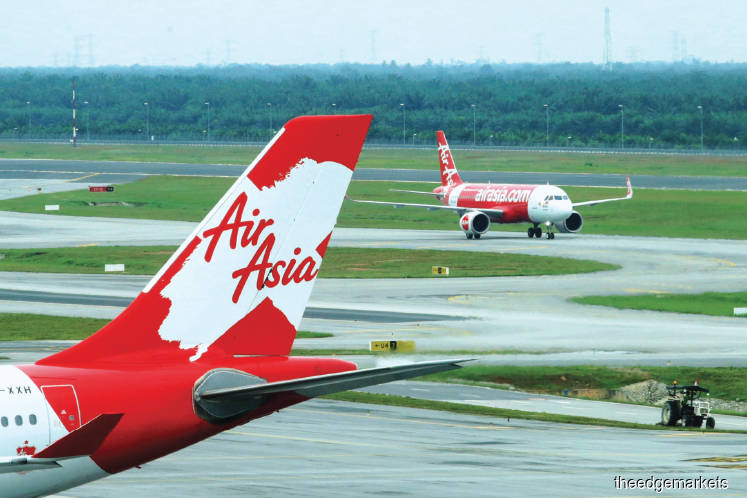 AirAsia is near to closing a RM500 million loan from the government. Sam Fong/The Edge

AS the coronavirus pandemic claims more casualties in the aviation sector, airlines are racing against time to raise funds and keep their operations going. Last Thursday’s report that AirAsia Group Bhd could see a RM334 million cash injection by the possible entry of a new investor sent its shares to a two-month high.

The potential investment by South Korea’s SK Corp, if it materialises, heralds a much-needed cash boost for the low-cost carrier, whose net cash position of RM2.1 billion as at end-2019 makes it the best placed airline in the country in these trying times. Analysts say, however, that the airline’s existing reserves alone will allow it to sustain operations only until year-end at the current cash burn rate.

Nomura Global Markets Research aviation analyst Ahmad Maghfur Usman estimates that AirAsia’s cash burn is now at RM120 million a month (excluding fuel hedging losses and after payment deferrals), given that it has trimmed its fixed burn costs by 60%.

According to industry sources, AirAsia is in talks with banks for a syndicated loan to support near-term cash requirements. Bloomberg has put the figure at RM1 billion.

“The loan facility is likely to involve some form of government backing, which is the case with airlines globally. That’s because based on standalone credit profiles, no bank would want to take on the risks of lending to airlines, given the continued lockdowns in most countries,” one industry source tells The Edge. He notes, however, that most banks are unlikely to be favourable to bundling the loans to include that for AirAsia’s long-haul arm AirAsia X Bhd (AAX), which is in more dire need of a cash injection. While AirAsia is bankable, he says, AAX’s low-cost long-haul business model remains questionable.

Last Thursday, The Star reported that AirAsia could place out new shares representing 10% in the carrier to SK Corp at RM1 each, which would see the South Korean chaebol forking out around RM334 million. The reported offer price represents a 21% premium to the stock’s closing price of 82.5 sen on Wednesday. It also values AirAsia at RM3.34 billion compared with its market capitalisation of RM2.76 billion on that day.

“The reported private placement is essentially an equity injection, which allows the carrier to manage its gearing levels concurrently with the debt coming in. The deal would also be a vote of confidence [in AirAsia], given that [SK Corp] is a solid foreign name,” says the industry source.

Nomura’s Ahmad Maghfur believes that AirAsia is also likely to turn to the equity market to raise additional capital, especially to settle on its cash deferral payment backlog.

“However, the size of this could also depend on how much soft funding can be provided by the respective governments [that AirAsia operates in],” he says in a report last Thursday.

Calls have been made for government support and it looks like the Malaysian government may finally be ready to share the pain that this unprecedented crisis has brought to airlines.

Ahmad Maghfur says AirAsia is near to closing a RM500 million loan from the government.

Still, the new debt would not be enough. Combining the reported syndicated loan amount of RM1 billion, the RM500 million government loan and the rumoured private placement of RM334 million would raise less than RM1.9 billion for AirAsia, which pales in comparison to the proceeds raised by foreign airlines. In March, Singapore Airlines Ltd undertook a massive cash call to raise S$15 billion (RM45.9 billion), not only to deal with the impact of Covid-19 on its business but also to position it for growth beyond the pandemic.

“This [increasing of the equity base by placing out new shares to new or existing shareholders] is considered the first move expected by governments, in the case for eventual state support,” says Khair Mirza, associate director of Canadian transport infrastructure consultancy Modalis Infrastructure Partners.

As leisure air travel is likely to be the last segment of the industry to recover, he says, AirAsia may be preparing to weather the storm.

“Even in the best-case scenario, companies may trim or right-size their workforce to face the reality of a new normal.

“In the end, we cannot rule out state support being sought as it already has been elsewhere, like in Australia and the UK. And, in such an eventual scenario, we have to face the reality that ownership may change if creditors are not appeased sufficiently.”

In April, the International Air Transport Association (IATA) had urged 18 governments in Asia-Pacific, including Malaysia, to provide support for their airlines.

Conrad Clifford, regional vice-president for Asia-Pacific at IATA, says that, while the Malaysian government has announced a US$58 billion enhanced economic stimulus package, it is unclear how much of it really goes directly into supporting the airline industry.

“Action needs to be taken urgently to assist the airlines through this crisis by providing direct financial support in the form of loans, loan guarantees, corporate bonds and incentive schemes. We estimate passenger demand for Malaysia to fall 51% in 2020 compared with 2019, putting at risk some 220,000 jobs, including those that depend on the airline industry, such as travel and tourism,” Clifford tells The Edge in an email interview.

The airline grouping is asking the government to consider providing relief on industry taxation such as departure levy, tourism tax and sales and service tax related to aviation, airport charges such as six months’ rebates for airport premises rental, landing and parking charges and recovery incentives, and rebates for air navigation charges or deferment of any planned increase.

“Time is of the essence. We urge the Malaysian government to act quickly. Having a viable aviation industry when we come out of the Covid-19 crisis will be critical to supporting the economic recovery,” says Clifford.

He believes the worst is not over for the airline industry. “Recently, we saw the Thai government sending Thai Airways to the bankruptcy court, which is similar to Chapter 11. There are others at risk. With much of the fleet grounded, airlines are burning cash.”

He believes airlines that will come out of this crisis successfully are those that have some form of support from the government to tide them over this challenging time.

On Friday, the government’s Short-Term Economic Recovery Plan brought no cheer to the airlines except for the extension of the period for deferment of tax instalment payment to Dec 31.