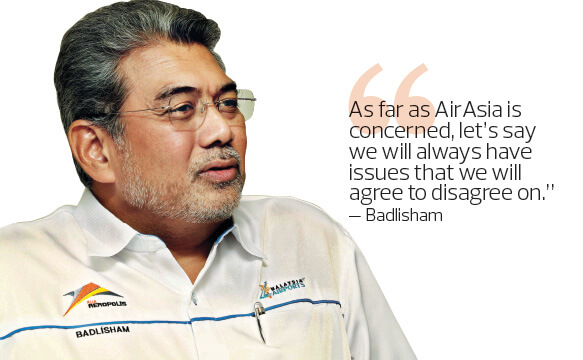 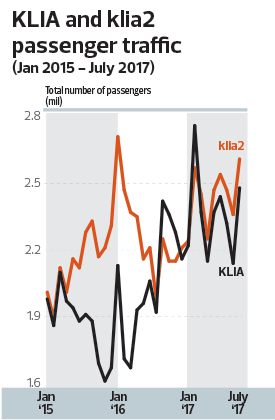 The only other airport operator is MMC Corp Bhd, which runs the Senai International Airport in Johor. MAHB operates the other 39 in the country.

However, Fernandes’ call is not new; neither is his uneasy relationship with MAHB. So, what reignited the friction?

When met recently, Fernandes clarifies that his remarks do not indicate AirAsia wants to build or run its own airport. Rather, it stems from his frustration over what he perceives to be MAHB’s reluctance to accommodate AirAsia’s needs as well as a lack of strategic alignment of the direction of the two companies.

“We want airport operators that want to grow with us, who want to listen to us,” the 53-year-old tells The Edge. “We’re 50% of this airport (Kuala Lumpur International Airport) and yet our wants are ignored. That has led to a slower growth (for AirAsia) than it could be.”

For example, says Fernandes, AirAsia had wanted to add up to four planes to its operations out of the Kota Kinabalu International Airport (KKIA) in Sabah, but was deterred by the “crippling” passenger service charges (PSCs). This led to its decision to place the planes at the Senai International Airport instead.

Fernandes cites Senai International Airport as a good example of an airport operator that works closely with AirAsia, resulting in what he calls “astounding growth” for the airline there.

Between January and July this year, AirAsia flew 1.34 million passengers in and out of Johor versus 1.99 million for the whole of 2016.

“Maybe if there were more competition in the airports, we would get a more reactive Malaysia Airports,” says Fernandes.

He adds that the airport operator has always been supportive of the low-cost air travel sector and that it is in MAHB’s best interests to see all its airline partners grow. “We love AirAsia — any airline that is growing is good for Malaysia and, of course, good for the airport,” Badlisham says in a separate interview. “As far as AirAsia is concerned, let’s say we will always have issues that we will agree to disagree on.”

The latest salvo from AirAsia comes when MAHB is pushing through expansion plans to raise the capacity of some airports. One of them is the Langkawi International Airport in Kedah, which will see its existing terminal capacity of 1.5 million passengers per year increase to almost four million by October 2018.

“It (expansion) will cost us about RM80 million,” says Badlisham, adding that the airport is currently handling 2.3 million passengers per year.

Airport capacity upgrades are the responsibility of the federal government. It is understood that MAHB will fork out the RM80 million first and gradually recover the cost over five years.

Another airport slated for capacity expansion is the Sultan Ismail Petra Airport in Kota Baru, Kelantan, which handled 2.06 million passengers last year, although its terminal capacity is designed for only 1.45 million. Work is expected to begin next year, says Badlisham.

In addition, MAHB is talking to the Sabah government for possible extra land around KKIA to facilitate future expansion. With a capacity of nine million passengers a year, KKIA currently sees roughly six million a year in passenger volume and the long-term plan is to bump up the capacity to 16 million, says Badlisham.

‘Build what we want’

Fernandes feels Malaysia should look at its airport policy again to move towards a dual-type airport system. He points to Europe where both full-service airports and LCCTs co-exist. The premium Heathrow Airport in London, the UK, for example, operates alongside the low-cost Luton and Stansted airports.

In the region, the Philippines, Thailand and Indonesia are already moving towards this arrangement, says Fernandes, warning that Malaysia will lose its advantage if its airport policy is not reviewed.

“You don’t have to have one airport with all the same type. Have two types. If we stick to a single airport policy, a one-size-fits-all (system), we’re going to lose out,” he says.

“If you’re an architect building a house, you want to listen to your clients and see what they want, right? We just want an airport operator to build what we want.”

To Fernandes,  his ideal airport should  look just a little better than the old LCCT in Sepang — with low PSCs and low operating cost.

“The old LCCT was my favourite airport of all time — low airport tax, low operating cost, without a complicated baggage system and it cost (only) RM350 million (to build). Penang and Kota Baru, for example, could do so much more (in terms of tourism) if they had LCCTs.”

It is worth noting that when the old LCCT was built, it was meant to be temporary in order to cater for the rapid growth in low-cost air travel at the time.

According to Fernandes, the missed opportunity costs involved over the years may have reached hundreds of billions of ringgit in potential addition to the gross domestic product (GDP), but he does not give a figure. “We’re currently putting (the numbers) together.”

He adds that there are many entrepreneurs who are interested in the airport operator business if the government were to heed his call to liberalise the sector. This includes the financial means to build new airports, if necessary, he observes.

In fact, AirAsia has been approached five times by businessmen keen to understand what sort of volume AirAsia might offer if they could gain entry into the airport sector, says Fernandes.

“The Sarawak and Terengganu governments have also approached us with keen interest to have LCCTs in their states,” he adds. “And if these investors say they need AirAsia there (as equity partners) for 5%, 10% to facilitate it, to show our commitment, then yeah, we would look at that.”

From MAHB’s perspective, Badlisham says it is the federal government’s prerogative to decide whether the airport industry should be liberalised. A key consideration, however, is the viability of the ensuing multi-operator model.

“This may create a situation where there is not enough travel-through or connecting volume available at any of the resultant smaller system of airports,” he says. “The current system of airports in Malaysia requires subsidisation of low-volume airports by the operator.”

The low-volume airports include the non-profitable ones that MAHB operates in the rural areas that require cross-subsidisation from profitable major airports to sustain connectivity.

Badlisham also believes that having a dual-type system may not be the most efficient way to move forward. He argues that the apparent dual-type system seen in some parts of the world is due to space constraints and is not by conscious design.

“London’s case is different where land availability is the limiting factor for additional capacity, both for terminals and especially for another runway. It was not the intention to build different types of terminals for different airline models. They have evolved as such because of capacity issues at Heathrow,” he points out.

Badlisham also remarks that airports should not be designed to cater for any single airline’s specific needs. He says it is crucial to retain flexibility in how an airport, once built, can be used because airline business models may evolve over time.

“Yes, (an airline may be) my biggest and most important customer, but I want the ability to reconfigure based on the country’s needs,” says Badlisham. “Because later on, you may still be the biggest airline but there will be other carriers that also need to use that terminal.”

He says, ultimately, a unified airport system offers the best operational efficiency for both airlines and passengers. A singular hub as opposed to separate terminals offers passengers the ability to connect seamlessly between a full-service carrier flight and a low-cost carrier flight. “The airlines may not want it, but the airports and the country need this network effect.”

The differing perspectives of MAHB and AirAsia may present a dilemma to the government. On the one hand, it would have to weigh the desires of a flag-carrying airline that can claim to be a homegrown global champion and boast of being Asia’s biggest low-cost carrier at 16 years of age.

On the other hand, it has a legacy airport operator that has invested considerable resources to a long-term national airport development plan as well as a long-standing model that sustains socially important — though loss-making — rural airports, thus fulfilling Putrajaya’s social responsibility.

Moving forward, the authorities will have to perform a delicate balancing act. Time will tell whether a middle path can be found.