AirAsia, AirAsia X to carry 48,566 passengers in average per day from KL this week 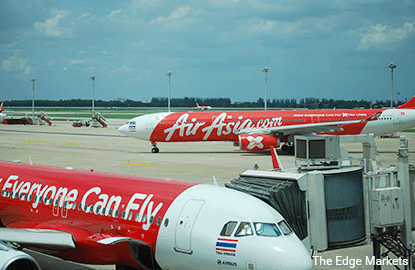 KUALA LUMPUR (July 4): An average of 48,566 AirAsia Bhd and AirAsia X Bhd passengers are expected to depart from Kuala Lumpur daily during the Aidilfitri festive period from July 1 to 9, the budget airline group said today.

The group said there would be no extra flights for the Aidilfitri season this year, but it has an increased seat capacity of 1.11 million seats for AirAsia and 291,798 seats for AirAsia X, during the peak travel period from July 1 to 17.

Over the course of the period, AirAsia and AirAsia X would have over 6,000 cabin crew working, it said in a statement.

The group said 246 AirAsia and AirAsia X flights would depart from Malaysia on Wednesday (July 6), with 270 pilots and 668 Malaysia-based cabin crew on duty.

In addition, its Malaysian ground staff, numbering more than 600, would be working daily during this festive period.

The group urged travellers to conduct self check-in, as well as to arrive at the airport earlier, to clear travel formalities and avoid expected congestion due to the surge in passengers travelling during this period.

Both stocks were among the top active counters today.