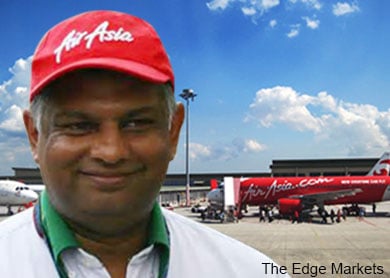 Based on the budget airline’s quarterly financial report submitted to Bursa Malaysia today, it shows that its associates companies registered a loss of RM17.2 million, as compared to a profit of RM13.95 million in 3QFY13.

One of its associate AirAsia X Bhd posted a net loss of RM210.9 million for the third quarter ended Sept 30, 2014 (3Q14), compared with net profit of RM26.4 million in the previous corresponding quarter a year ago.

AirAsia revealed that such deferred tax liabilities arose from the difference between the net book value, and tax written down value of property, plant and equipment; while deferred tax assets arose from capital allowances, along with the investment allowances granted on aircraft delivery.

“The company is seeing an improvement in yield. We managed to maintain our average fare this quarter, which is a very good sign, compared to the previous quarters where average fares were down y-o-y. This indicates the end of price war, and the company can now focus on driving more profitability in a more rational environment,” said AirAsia CEO Aireen Omar.

AirAsia said that its average fare, which is flat year-on-year at RM169, indicated its competitors are becoming more rational when it comes to pricing.

On the other hand, the group registered a revenue of RM1.3 billion, 3% higher than RM1.28 billion in previous corresponding quarter.

AirAsia attributed the growth to the rise in ancillary income per passenger, which increased 15% to RM47 from RM41 year-on-year, and a 0.5% increase in passenger numbers and a 3% increase in unit passenger revenues to RM216, from RM210 last year.

For the nine-month period, AirAsia’s profit has doubled to RM512.27 million, from RM198.62 million in preceding corresponding period; while revenue increased marginally to RM3.93 billion, up 2.34% from RM3.84 billion last year.

“It was a tough quarter for a lot of airlines, hence forcing them to re-examine their strategy, cost structure, capacity deployment, and pricing to ensure sustainability.

“Adding on to this, the downward trend of fuel price will be very good for the company and the Group as a whole, as fuel takes up 50% of our overall cost,” said AirAsia founder Tan Sri Tony Fernandes, commenting on outlook in the statement today.

He also recognised external factors are the main reasons for overseas market to not be able to perform as desired, such as the political situation in Thailand and the weakening of Rupiah in Indonesia.

“The Philippines is a tough market, but we have a solid turnaround plan in place for PAA, and as for India, AAI (AirAsia India) has and exciting path ahead of it. The AirAsia brand is growing strong in India, and if our plans go through smoothly and some regulatory hurdles could be lifted off, AAI will surely soar,” Tony added.