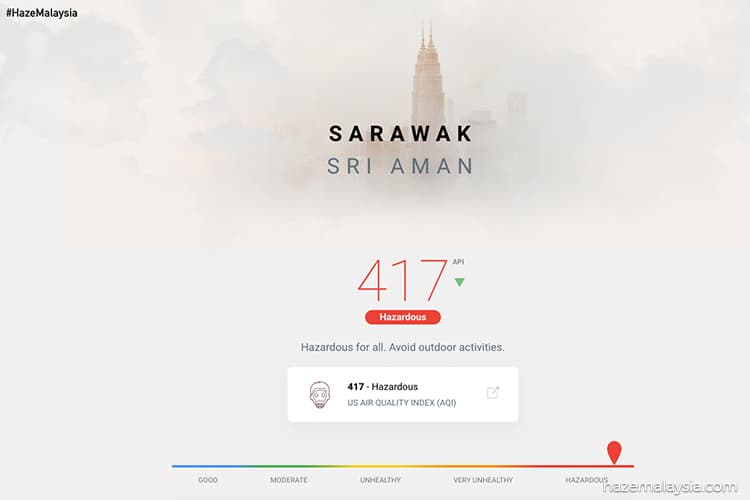 KUALA LUMPUR (Sept 20): Air quality in Sri Aman, Sarawak, has reached the hazardous level again this morning with the Air Pollutant Index (API) reading soared to 414 as of 9 am, compared to 210 recorded at 5 pm yesterday.

Sri Aman, located near the Kalimantan region of Indonesia, is currently experiencing forest fires and transboundary haze, leading to increased API readings in all areas near western region of Sarawak and around Tawau and Sandakan in Sabah.

Minister of Energy, Science, Technology, Environment and Climate Change (Mestecc) Yeo Bee Yin yesterday said another cloud seeding operation would be carried out in Sarawak today to help lower the API readings in the state.

Meanwhile, forest fires in Sumatra have caused air quality in areas along the west coast and south of Peninsular Malaysia to deteriorate.

In addition, Segamat in Johor also recorded unhealthy API at 105, while in Terengganu, Kuala Terengganu recorded API of 109 and Besut (104) and four areas in Sarawak were also experiencing similar conditions, namely in Miri (104), Samalaju (103), Bintulu (116) and Mukah (167).