Ahmad Maslan admits there is letter of support, but insists it does not amount to guarantee

KUALA LUMPUR: In an about-turn, Deputy Finance Minister Datuk Ahmad Maslan has admitted that the government has issued a letter of support to 1Malaysia Development Bhd (1MDB) for its loans, but insisted that it does not amount to a guarantee.

“Under the terms of this letter, should 1MDB not honour their obligations related to this bond, any claims against the government [in addition to 1MDB] is only limited to the terms of the letter, which is not a government guarantee,” he said. 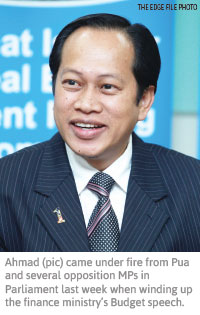 Ahmad was responding to a query by The Edge Financial Daily yesterday over whether he could have made a mistake while addressing Parliament last Thursday, when he said there was no such letter of support as highlighted by DAP national publicity secretary and MP for Petaling Jaya Utara Tony Pua.

“I issued the statement on Saturday (Nov 8),” said Maslan in a text message.

However, he did not say what the terms and conditions in the letter of support were.

In the statement, Ahmad said: “As was made clear in Parliament on Thursday, the government guarantee issued in favour of 1MDB is only at RM5.8 billion.

“I would like to inform that there is no letter that guarantees more than the amount stated. The government did not issue any more guarantees other than the RM5.8 billion for 1MDB or its wholly-owned subsidiaries, including for the US$3 billion (RM10 billion) bonds,” he said.

Ahmad came under fire from Pua and several opposition MPs in Parliament last week when winding up the finance ministry’s Budget speech when addressing issues on 1MDB’s debt and a purported letter of support that the federal government had provided for 1MDB Global Investments Ltd, a wholly-owned subsidiary of 1MDB, to borrow US$3 billion in March 2013.

The Edge weekly, over the weekend, ran a copy of the letter of support from the government to 1MDB for its US$3 billion bonds.

The letter, dated March 14, 2013, stated that “the government of Malaysia hereby confirms and undertakes to provide the necessary financial assistance to the issuer”:

i) in the event the Issuer (1MDB Global Investments) is unable to pay for the funds due under the debt or if there are any shortfalls in the payment of the funds, 1MDB shall first endeavour to inject the necessary capital to ensure that the Issuer is able to service its obligations.

ii) in the event 1MDB, as shareholder of the Issuer, fails to provide the required funds, Malaysia shall then step in to inject the necessary capital into the Issuer or make payments to ensure the Issuer’s obligations are fully met.

Pua had previously raised concerns that these “dubious letters of support” are not registered anywhere in the government’s financial statements despite their grave, material and substantial implications.

In a separate statement yesterday, Pua said with the official denial by the government of the existence of such a letter within the august house of Parliament, the letter of support published by Goldman Sachs International (GSI) to investors for the purposes of raising the US$3 billion bond for 1MDB Global Investments must be a “forgery and the bond-raising exercise fraudulent”.

“Goldman Sachs had not only charged exhorbitant fees to 1MDB amounting to 9.4% of the US$3 billion bonds sold, the global investment bank distributed fraudulent letters from the government to do so,” he said.

Pua called upon the government to immediately file police and Interpol reports on the fraud; and the Attorney-General to commence investigations to prosecute Goldman Sachs International for distributing fake letters of support by the government.

This article first appeared in The Edge Financial Daily, on November 11, 2014.