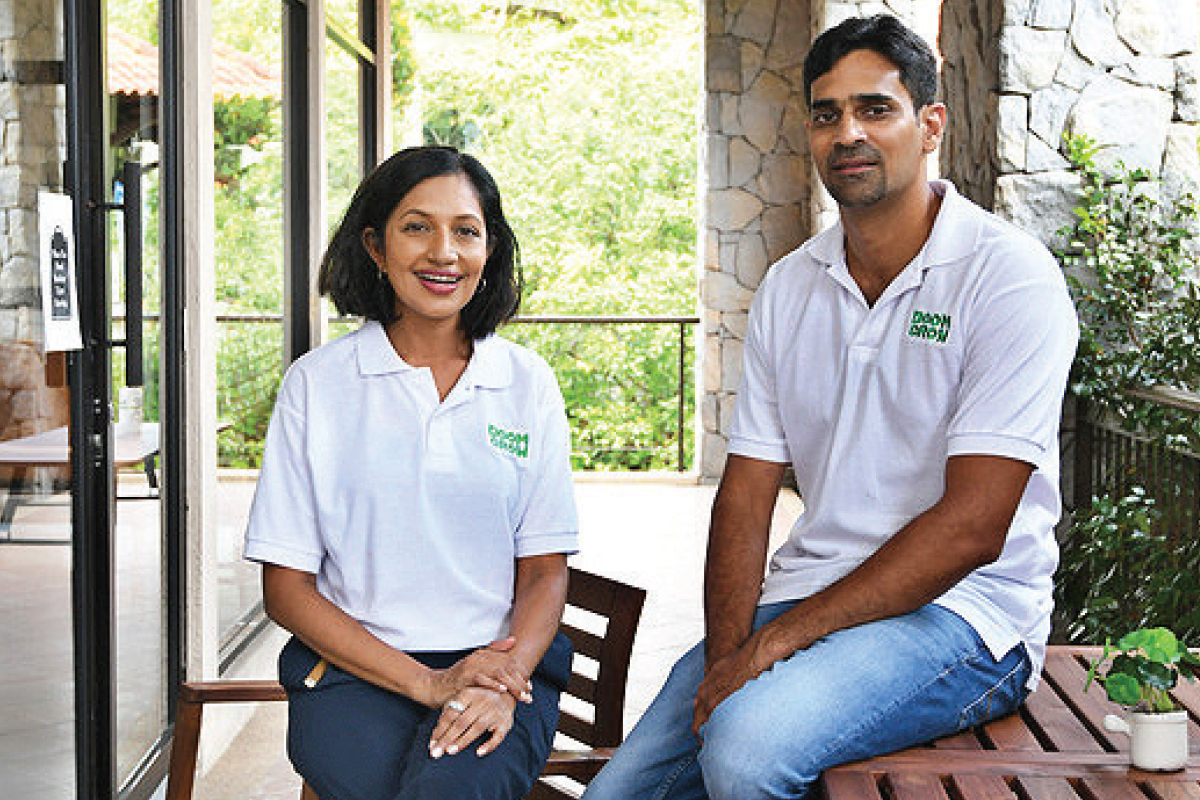 For a company that grows and delivers vegetables, Boomgrow Productions Sdn Bhd’s office is nothing like a farm, or even a vertical farm.

Where farms are bedecked with wheelbarrows, spades and hoes, Boomgrow’s floor plan is akin to a co-working space with a communal island table, several cubicles, comfortable armchairs, a cosy hanging rattan chair and a glass-walled conference room in the middle.

At a corner, propped up along a walkway leading to a rectangular chamber fitted with grow lights, are rows of support stilts with hydroponic planters developed in-house and an agricultural technologist perched on a chair, perusing data. “This is where some of the R&D work happens,” says Jay Dasen, co-founder of the agritech start-up.

But there is a larger farm where most of the work behind this high-tech initiative is executed. Located a stone’s throw from the city centre in Ampang is a 40ft repurposed shipping container outfitted with perception technologies and artificial intelligence (AI) capabilities that mimic the ideal environment to produce more than 50,000kg of vegetables a year.

Stacked in vertical layers, Boomgrow’s vegetables are grown under artificial lights with Internet of Things (IoT) sensors to detect everything from leaf discolouration to nitrate composition. This is coupled with AI and machine learning algorithms.

Boomgrow is the country’s first 5G-connected vertical farm. With the low latency and larger bandwidth technology, the start-up is able to monitor production in real time as well as maintain key para­meters, such as temperature and humidity, to ensure optimal growth conditions.

When Jay and her co-founders, K Muralidesan and Shan Palani, embarked on this initiative six years ago, Boomgrow was nowhere near what it is today.

The three founders got together hoping to do their part in building a more sustainable future. “I’ve spent years advising small and large companies on sustainability, environmental and social governance disclosures. I even embarked on a doctorate in sustainability disclosure and governance,” says Jay.

“But I felt a deep sense of disconnect because while I saw companies evolving in terms of policies, processes and procedures towards sustainability, the people in those organisations were not transforming. Sustainability is almost like this white noise in the background. We know it’s important and we know it needs to be done, but we don’t really know how to integrate it into our lives.

“That disconnect really troubled me. When we started Boomgrow, it wasn’t a linear journey. Boomgrow is something that came out of meaningful conversations and many years of research.”

Shan, on the other hand, was an architect who developed a taste for sustainable designs when he was designing modular structures with minimal impact on their surroundings between regular projects. “It was great doing that kind of work. But I was getting very dissatisfied because the projects were customer-driven, which meant I would end up having debates about trivial stuff such as the colour of wall tiles,” he says.

As for Murali, the impetus to start Boomgrow came from having lived overseas — while working in capital markets and financial services — where quality and nutritious produce was easily available.

Ultimately, they concluded that the best way to work towards their shared sustainability goals was to address the imminent problem of food shortage.

“By 2050, the world’s population is expected to grow to 9.7 billion people, two-thirds of whom will be in Asia-Pacific. Feeding all those people will definitely be a huge challenge,” says Jay.

“The current agricultural practice is not built for resilience, but efficiency. So, when you think of farming, you think of vast tracts of land located far away from where you live or shop.

“The only way we could reimagine or rethink that was to make sure the food is located closer to consumers, with a hyperlocal strategy that is traceable and transparent, and also free of pesticides.”

Having little experience in growing anything, it took them a while to figure out the best mechanism to achieve their goal. “After we started working on prototypes, we realised that the tropics are not designed for certain types of farming,” says Jay.

“And then, there is the problem of harmful chemicals and pesticides everywhere, which has become a necessity for farmers to protect their crops because of the unpredictable climate. We went through many iterations … when we started, we used to farm in little boxes, but that didn’t quite work out.”

They explored different methodologies, from hydroponics to aquaponics, and even started growing outdoors. But they lost a lot of crops when a heat wave struck.

That was when they started exploring more effective ways to farm. “How can we protect the farm from terrible torrential rains, plant 365 days a year and keep prices affordable? It took us five years to answer these questions,” says Jay.

Even though farmers all over the world currently produce more than enough food to feed everyone, 820 million people — roughly 11% of the global population — did not have enough to eat in 2018, according to the World Health Organization. Concurrently, food safety and quality concerns are rising, with more consumers opting for organically produced food as well as safe foods, out of fear of harmful synthetic fertilisers, pesticides, herbicides and fungicides.

According to ResearchAndMarkets.com, consumer demand for global organic fruit and vegetables was valued at US$19.16 billion in 2019 and is anticipated to expand at a compound annual growth rate (CAGR) of 6.5% by 2026.

Malaysia currently imports RM1 billion worth of leafy vegetables from countries such as Australia, China and Japan. Sourcing good and safe food from local suppliers not only benefits the country from a food security standpoint but also improves Malaysia’s competitive advantage, says Jay.

Unlike organic farming — which is still a soil-based method — tech-enabled precision farming has the advantage of catering for increasing demand and optimum crop production with the limited resources available. Moreover, changing weather patterns due to global warming encourage the adoption of advanced farming technologies to enhance farm productivity and crop yield.

Boomgrow’s model does not require the acres of land that traditional farms need, Jay emphasises. With indoor farms, the company promises a year-round harvest, undisturbed by climate and which uses 95% less water, land and fuel to operate.

Traditional farming is back-breaking labour. But with precision technology, farmers can spend less time on the farm and more on doing other things to develop their business, she says.

Boomgrow has secured more than RM1 million in funding via technology and innovation grants from SME Corporation Malaysia, PlaTCOM Ventures and Malaysia Digital Economy Corporation, and is on track to build the country’s largest indoor farms.

The company got its chance to showcase the strength of its smart technology when Telekom Malaysia Bhd (TM) approached it to be a part of the telco’s Smart Agriculture cluster in Langkawi last October.

“5G makes it faster for us to process the multiple data streams that we need because we collect data for machine learning, and then AI helps us to make decisions faster,” Jay explains.

“We manage the farm using machines to study inputs like water and electricity and even measure humidity. All the farm’s produce is lab-tested and we can keep our promise that there are no pesticides, herbicides or any preserving chemicals. We follow the food safety standards set by the EU, where nitrate accumulation in plant tissues is a big issue.”

With TM’s 5G technology and Boomgrow’s patent-pending technology, the latter is able to grow vegetables like the staple Asian greens and highland crops such as butterhead and romaine lettuce as well as kale and mint. While the company is able to grow more than 30 varieties of leafy greens, it has decided to stick to a selection of crops that is most in demand to reduce waste, says Jay.

As it stands, shipping containers are the best fit for the company’s current endeavour as containerised modular farms are the simplest means of bringing better food to local communities. However, it is also developing a blueprint to house farms in buildings, she says.

Since the showcase, Boomgrow has started to supply its crops to various hotels in Langkawi. It rolled out its e-commerce platform last year after the Movement Control Order was imposed.

“On our website, we promise to deliver the greens within six hours of harvest. But actually, you could get them way earlier. We harvest the morning after the orders come in and the vegetables are delivered on the same day,” says Jay.

Being mindful of Boomgrow’s carbon footprint, orders are organised and scheduled according to consumers’ localities, she points out. “We don’t want our delivery partners zipping everywhere, so we stagger the orders based on where consumers live.

“For example, all deliveries to Petaling Jaya happen on Thursdays, but the vegetables are harvested that morning. They are not harvested a week before, three days before or the night before. This is what it means to be hyperlocal. We want to deliver produce at its freshest and most nutritious state.”

Plans to expand regionally are also underway, once Boomgrow’s fundraising exercise is complete, says Jay. “Most probably, this will only happen when the Covid-19 pandemic ends.”

To gain the knowledge they have today, the team had to “unlearn” everything they knew and take up new skills to figure what would work best for their business, says Jay. “All this wouldn’t have been possible if we had not experimented with smart cameras to monitor the condition of our produce,” she laughs.