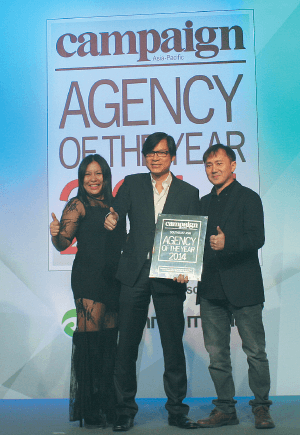 CAMPAIGN Asia-Pacific’s Agency of the Year, held since 1994, is one of the regions’ most prestigious awards. Coveting winning titles were contenders from Australia, New Zealand, China, Japan, Korea, South Asia, and Southeast Asia.

Submissions were vetted by a diverse jury panel, and winners recognised for innovation, inspired leadership, management excellence, and outstanding business performances in the region’s advertising and communications industry. This year some 91 judges consisting of senior marketers from key business categories evaluated almost 800 submissions.

Mindshare Malaysia took top honours with gold in the ‘Malaysia Media Agency of the Year’ — its second consecutive win but this time, in a joint position with Carat.

Mindshare’s win strengthens its reputation in the segment as this makes it its second such accolade for the year having won advertising and marketing’s “Media Agency of the Year 2014” award.

Mindshare Asia-Pacific chief operations officer Gowthaman Ragothaman said the award was a testament of the team working together, “absolutely focused and continuing to build its reputation in the market as the lead business partner for clients.”

In an email interview with The Edge Financial Daily, he said: “We are particularly proud of this win as it is bestowed by marketers and judged by industry experts. Each Agency of the Year title is significant and it is an achievement to win the award for the second consecutive year.”

Universal McCann and Starcom Mediavest Group took silver and bronze in the category.

Recognising an increasingly crowded and competitive market in Malaysia, Gowthaman says Mindshare differentiates itself through the vision of “transformation” through creating a modern organisation that is agile, proactive, and equipped to swiftly respond to changes.

“This was practised across all aspects of the agency — our thinking, our work, our culture — bringing to life our agency positioning of original thinking driven by speed, provocation and teamwork,” he added.

Meanwhile, PHD scooped up the Media Network of the Year title — the media agency’s fourth win in six years.

PHD Asia-Pacific chief executive officer (CEO) Susana Tsui commented: “This has been a phenomenal year for PHD, and winning the award on the back of all our achievements in 2014 is a testament to the excellent work done by our teams; their diligence and passion for the business.”

Tsui dedicated the win and the honour of winning it to “every single member of the team at PHD Asia Pacific.”

“It clearly shows that the PHD brand is strong because of its consistent performance across important business metrics like culture, business growth, talent retention and development, client retention, industry contribution, new business wins, award wins, driving innovation, and launching new initiatives. Some agencies dream of winning this amazing accolade just once in a lifetime so to achieve it across four years is a huge achievement,” he added.

Leo Burnett Malaysia CEO Tan Kien Eng said: “We are humbled at the honour of being recognised by the region’s industry leaders and it is because of our clients who have entrusted us with their brands, that has allowed us to create our best work. For that, they have our deepest gratitude.”

Tan said the agency’s work is deeply rooted in its HumanKind philosophy — it believes that creativity has the power to change human behaviour.

“This has translated into business success for our clients and growth of our long-standing partnerships with them.

“We are also very privileged to be recognised not just for our creative advertising capabilities, but also for our multifaceted areas of expertise as shown in our strength of wins across digital, public relations, social media, events and CRM (customer relationship management),” Tan said, referring to the Southeast Asia Specialist Agency of the Year win which reflected the key competencies of an integrated agency.

Leo Burnett, Tan added, looks to raise the bar further and continue to push Malaysia’s name in creativity, to show the world “that Malaysia is just as capable of producing impactful creative work that can influence behavioural change in people and communities.” 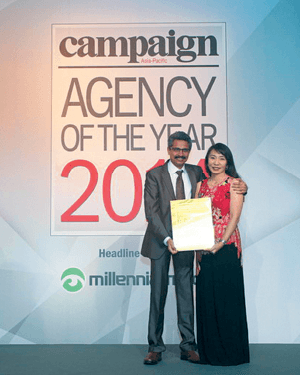