Agencies to be compelled to share data after statistics law review 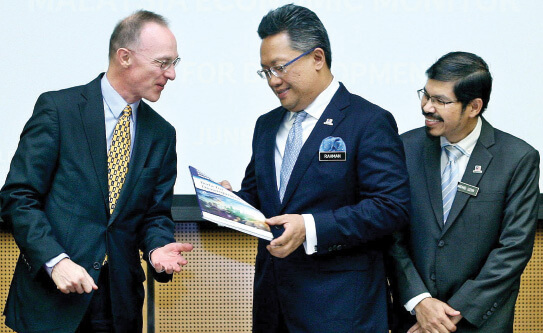 KUALA LUMPUR: The statistics department says Malaysia’s economy is expected to see better growth as data collection and sharing are upgraded via amendments to the Statistics Act 1965 in two years.

“The country will benefit from good statistics once data management improves, which is pertinent for Malaysia to progress and survive in a competitive world with a strong footing,” said chief statistician Dr Mohd Uzir Mahidin.

“If the government has good data, it can focus on areas that need incentives and be specific about policies for nation-building. With efficiency, growth would increase due to better policy planning,” he said.

Speaking to reporters after the launch of the World Bank’s biannual Malaysia Economic Monitor report, Mohd Uzir said the total review of the Statistics Act includes the compulsion of government departments to share their survey information with the statistics department.

“We want to look at data tapping from administrative records of the offices and ministries, such as the Inland Revenue Board, Employees Provident Fund and the education ministry.

“At the moment, it is not that they are uncooperative, but they have their own laws that do not allow them to share,” he added.

Mohd Uzir said the department needs granular data that can help with better decision-making compared with aggregate data that is often shared with the statisticians by government offices.

He said the private sector, including manufacturers, wholesalers and retailers, shares information in terms of performance, efficiency and export numbers with the department.

“From that, we can advise the government in relation to efficient sectors that can produce more with less input or high productivity,” he said.

Minister in the Prime Minister’s Department Datuk Seri Abdul Rahman Dahlan called for more localised statistics, such as unemployment and inflation levels at the district level, for better policy formulation.

Abdul Rahman also said the data should be accessible to the public, although there are concerns about privacy and security, and manipulation by people to give a wrong impression of the economy.

“But I think the benefits far outweigh the risks. I believe the more people talk about the data, we would have a better understanding of the economy and they would be able to create new businesses based on data collection,” he added.

In the Malaysia Economic Monitor report, the World Bank — which revised its forecast for Malaysia’s economic growth in 2017 to 4.9% from 4.4% — said better data management would aid the country’s high-income status goal.

“The more reliable [the] good data management system, the more accessible [it is] to more people, [and] the more developed the country is in terms of per capita income. Information and the use of data are fragmented in Malaysia, so it needs to open up more. There are always concerns about privacy and data security, but there are ways [to] address and manage them,” said World Bank country director for Southeast Asia Ulrich Zachau.

He added that there is an imbalance relating to professionals involved in data.

“There is a relatively small number of well-qualified, highly skilled educated officials or people working on this. Over time, there should be a change in that balance to include highly skilled people who can understand, work and manage data, which is different from data management 30 years ago,” he added.

Zachau said that as demand for data is increasing in quantity and sophistication, Malaysia has the opportunity to build on its existing statistics infrastructure to broaden and deepen access to open data, and develop systems for data management that are fit to join the ranks of high-income economies.

The World Bank noted that its revised gross domestic product forecast is slightly above the government’s projection range of 4.3% to 4.8%. The bank also revised its forecasts for Malaysia’s growth in 2018 and 2019 to 4.9% and 5% respectively.