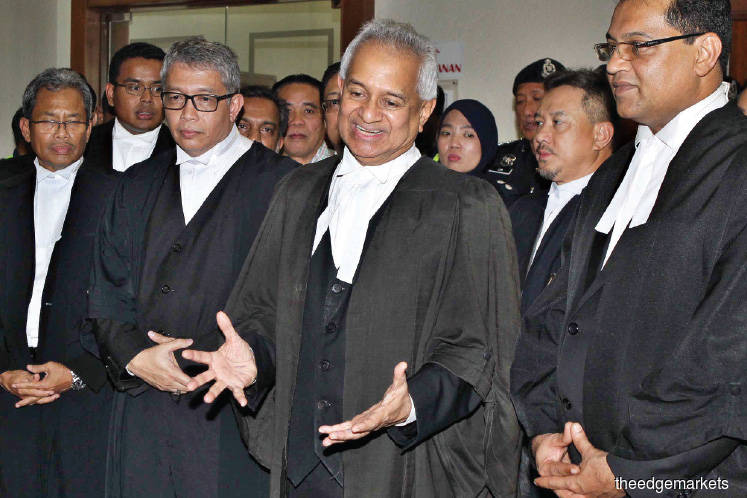 KUALA LUMPUR: Attorney-General (AG) Tommy Thomas said he will oppose the imposition of the gag order in former prime minister Datuk Seri Najib Razak’s case if the defence seeks to extend the order for the full trial period.

Thomas said he was not sure of the grounds on which the interim gag order was approved. The order bans the public from discussing the four charges against Najib through any form of media.

“I don’t think [the judge] gave [his] grounds [for allowing the request]. I think you should ask the [defence team] why [they made that request]. We objected to the gag order. We are not sure whether the court has jurisdiction to order the gag,” he added.

When asked, Muhammad Shafee said the interim order is to prevent prejudgement of the case. The order also applies to social media.

A law lecturer described the interim gag order as “vague, baffling and not a fair request”.

Mariette Peters, an adjunct lecturer for evidence law, said although the order is supposed to cover only aspects of the charges, there is the issue of where to draw the line. “There are so many interrelated and intertwining issues, and how do you monitor the public? And if this includes social media, how is it going to be policed?” she said when contacted by The Edge Financial Daily.

“Simply put, it (gag order) is the casual term for the sub judice principle, which means  ‘under judgement’. Historically, this principle was meant to prevent the media and public from discussing [a case] for fear of influencing the jury,” said Peters.

In Malaysia, however, jury trials were abolished in 1995. Thus, gag orders now are usually issued to protect those in high-profile and sensitive cases, or to protect the privacy of victims or minors.

“That is why the gag order in this case is baffling. According to news reports, it is to ‘prevent prejudgement’. If the judge is the sole arbiter, is the gag order to prevent himself from being prejudiced? That does not make sense because the judge is professional enough to decide the case based on relevant evidence. Is this case a secret? No. Like Mr Thomas said, the whole world is talking about it,” Peters added.

University of Nottingham Malaysia assistant professor for media and politics Gayathry Venkiteswaran said the order is a form of censorship, and does not make sense as the media has already been covering the issue.

She said if there are instances where discussions are found to be prejudicial to the trial (when it begins), then the case can be made specifically to the judge `rather than ask for what is essentially a blanket ban’ at this point.

“The defence is entitled to make its request and I think that is their prerogative. However, it was disappointing that the court allowed for the request without providing much clarification on what it meant or covered. It is a form of censorship,” she said.

The former Centre for Independent Journalism executive director said the order clearly makes it difficult for the media to report on the subject and for the public who are following the case closely, to monitor and share their viewsm, adding the trial of a former prime minister and his alleged corruption should be subject to wide scrutiny. “The order can be seen as a threat to free expression as it prohibits people from discussing a high-profile case and one of tremendous public interest concern,” Gayathry said.

As the media is the fourth estate, it should be allowed to perform its role, she said.

Likewise civil rights lawyer Syahredzan Johan sees the order as a violation of the freedom of expression as enshrined in the Federal Constitution.

“A gag order on the media is against media freedom and would punish the local media but not foreign media, as that is outside the court’s powers. It is undeniable that Najib is innocent until proven guilty and that there might be elements of prejudice in media reports, but Najib has the right to defend himself against all charges.”