After the hard work, comes the heartbreak for MACC 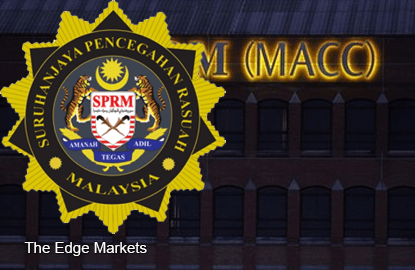 That would be the best term to describe the mood among investigators at the Malaysian Anti-Corruption Agency (MACC) following the decision by the Attorney-General (A-G) not to press charges against Datuk Seri Najib Razak over the RM2.6 billion donation and SRC International.

Sources close to the investigations told The Malaysian Insider that MACC had recommended Najib be charged with criminal misappropriation, but A-G Tan Sri Mohamed Apandi Ali had said there was insufficient evidence.

"Of course they are demoralised. But they will have to find ways to revive themselves," said one source.

Another source said as investigators, MACC did their job meticulously.

"But now everyone thinks the A-G made the decision based on MACC’s recommendation when that was not the case,” the source said.

Furthermore, the source added, a former minister had suggested that "MACC close shop", referring to Datuk Zaid Ibrahim who had tweeted, "If true MACC says no offence committed by Najib, then MACC should just close shop."

The source said investigators were confident that they had an air-tight case, especially since the A-G had not called them for more clarification after the investigation papers were sent back to him.

Yesterday, however, Apandi had said that he contacted two senior MACC officials before clearing Najib.

The source said MACC had over the last month been reminding the public about its professionalism in handling the case.

Another source noted that on Dec 24, MACC chief commissioner Tan Sri Abu Kassim Mohamad had said the anti-graft agency’s investigation was independent, even as critics insisted the prime minister will escape punishment as long as he is in power.

"Even though there are all sorts of perceptions about these issues, as long as I am the chief commissioner, I will carry out investigations professionally. When we have a case, we will present our recommendations in the investigation paper. And they are truly based on merit.

"No other quarters will influence us and the investigation's direction. That was the promise I made to the MACC officers in a meeting," Abu Kassim was quoted as saying.

Similarly on Dec 31, in a statement, MACC deputy commissioner (operations) Datuk Seri Mohd Shukri Abdull said the anti-graft agency had made several recommendations for action to be taken on these two cases.

“Why can’t the public see this? Can’t they read between the lines. Shukri's statement on Dec 31 was very clear because he had stated that charges had been proposed and trusted the A-G would act professionally in arriving at his decision,” the source said.

The source added that the A-G decision's has left many in the MACC frustrated.

“They (MACC) worked so hard on this case and now people think that the A-G acted on their findings and advice,” the source said.