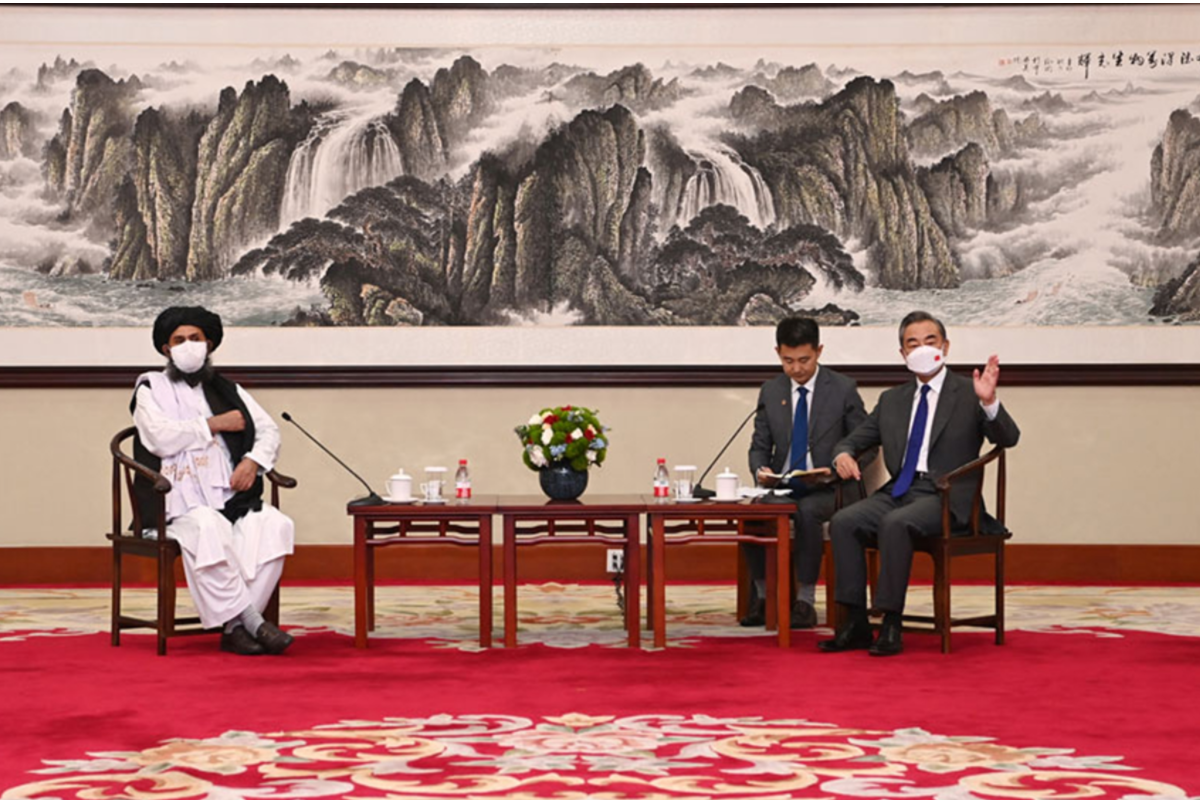 (July 29): China could play the role as a better mediator between the Afghan government and the Taliban for its smooth and high-level communication with both sides whose peace talks may be stuck in stalemate for a long time, analysts said in response to an Afghan Taliban delegation's trip in Tianjin on Wednesday and its reiteration of a previous promise of never allowing any force to use the Afghan territory to endanger China, Global Times reported.

China reiterated that the East Turkistan Islamic Movement (ETIM) is a UN-designated terrorist group and hopes that the Afghan Taliban will make a clear break with all terrorist organizations including ETIM, Chinese State Councilor and Foreign Minister Wang Yi said while meeting with a Taliban delegation from Afghanistan in Tianjin on Wednesday.

The meeting came after a Taliban delegation visited Moscow at the beginning of July. Analysts said instead of visiting other regional countries, the Taliban chose to first visit Russia and China, which shows it has recognized the two countries' previous efforts in promoting the peace process in Afghanistan and eyed a bigger role for them in future reconstruction of the war-torn country.

As an important military and political force in Afghanistan, the Afghan Taliban is expected to play an important role in the peaceful reconciliation process in Afghanistan. We hope that the Afghan Taliban will put national interests first, hold high the banner of peace talks, establish the goal of peace, build a positive image and pursue an inclusive policy, Wang said during the meeting, Global Times reported.

Wang noted that as Afghanistan's largest neighbor, China has always respected Afghanistan's sovereignty, independence and territorial integrity. The hasty withdrawal of US and NATO troops from Afghanistan marked the failure of US policy in Afghanistan and it is an opportunity for the Afghan people to stabilize and develop their country.

The situation in Afghanistan has entered a crucial period after the US pulled out most of its forces and peace talks between the Taliban and the Afghan government are in stalemate, with both parties seeking a breakthrough. Against this backdrop, the Taliban delegation visited China to elaborate its stance and to win support from China, Wang Jiang, a distinguished research fellow at the Institute for Frontier Region of China, Zhejiang Normal University, told the Global Times.

In a previous exclusive interview with the Global Times, Afghan Ambassador to China Javid Ahmad Qaem expressed deep distrust toward the Taliban. "The sincerity of the Taliban for peace talks leaves a very big question mark upon them," Qaem said, adding that the biggest challenge to the political settlement is the Taliban itself.

Wang Jiang noted that the members of the Taliban delegation to China showed their sincerity and goodwill to help China further understand them, for example the representative from religious commission may explain the Taliban's changes on religious polices.

Baradar said on Wednesday the Afghan Taliban has full sincerity in realizing peace in the country and is willing to work with every party to build a political system that is widely accepted by Afghanistan people and will protect human rights and the interests of women and children.

Before the visit to China, a Taliban delegation visited Moscow on July 8, meeting Kremlin envoy for Afghanistan Zamir Kabulov who expressed concerns about the escalation and tensions in northern Afghanistan. Kabulov also urged the Taliban "to prevent them from spreading beyond the country's borders," AP reported.

"After returning to the Afghan mainstream politics since US-led troops withdrawal, the Afghan Taliban chose to first visit Russia and China instead of other countries - two powers that have no sharp conflicts of interests with it. It shows the Taliban attaches great importance to developing ties with the two major countries, and it believes in their influence in helping to rebuild Afghanistan," Li Wei, an expert on national security and anti-terrorism at the China Institute of Contemporary International Relations, told the Global Times.