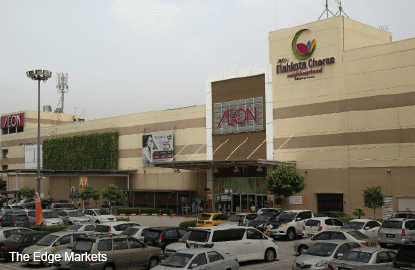 This article first appeared in The Edge Malaysia Weekly, on September 28 - October 4, 2015.

RETAILER-cum-property manager AEON Co (M) Bhd is looking to dispose of AEON Mahkota Cheras Mall — one of the smaller malls within the group — in Bandar Mahkota Cheras, Selangor, for at least RM80 million.

The retailer has set a reserve price of RM80 million for the five-year-old property. This means that AEON Co (M) may be willing to part with the asset should it receive a minimum payment of RM80 million. The successful bidder will also have to bear a 6% Goods and Services Tax (GST) on the price at which the deal is sealed.

The documents also indicate that AEON Co (M) had set Sept 1 as the closing date for the submission of bids. However, sources say the deadline had been subsequently extended up until last week.

AEON Co (M) executive director Poh Ying Loo did not respond to calls or messages from The Edge.

AEON Co (M), 51.68% owned by Japan’s AEON Co Ltd, made its debut in Malaysia 30 years ago under the Jaya Jusco brand name. The Japanese parent also wholly owns and operates a hypermarket business here under the AEON BiG brand.

Sources say AEON Co (M) is divesting itself of AEON Mahkota Cheras due to a change in business direction and to avoid cannibalisation. AEON Co (M)’s strategy going forward is to own larger malls that sit on at least 12 acres of land. AEON Mahkota Cheras offers 211,405 sq ft in net lettable area (NLA) and the two-storey building sits on a seven-acre parcel.

There are several other AEON branded stores in close proximity to the said shopping centre. AEON Cheras Selatan Shopping Centre in Lebuh Tun Hussein Onn in Balakong, for example, is just 4.8km or a 10-minute drive away. Another AEON department store-cum-supermarket in the vicinity is AEON Taman Maluri Mall, which is about 14km away. Moreover, there is an AEON BiG hypermarket located just 3.8km from AEON Mahkota Cheras.

At first glance, an RM80 million price tag sounds rather cheap for a completed and fairly new building in Cheras as it is equivalent to RM378 per sq ft. A valuer contacted by The Edge says the average price for malls in the area is RM500 to RM600 psf.

However, industry observers were quick to point out that there are several other considerations which can influence the purchase value. “What is the yield? Will AEON continue to be a tenant or will they leave? If they (AEON) stay as a tenant, for how long will they remain? What will happen if the anchor tenant moves out, especially in this market since many new malls are not even able to get tenants?” an observer asks.

The sale of the asset is on an “as is where is” basis. There is also no indication if AEON Co (M) will enter into a sale-and-leaseback agreement with the new owner.

This is not the first time AEON Co (M) has sold a shopping centre. In 2005, it disposed of Kinta City Shopping Centre in Ipoh, Perak, for RM121 million and entered into a leaseback agreement with the buyer. More recently, in 2013, the group sold an 18.18% stake in AEON Taman Universiti Shopping Centre in Johor for RM20 million to AEON REIT Investment Corp.

Today, there are 30 AEON stores, of which 23 are owned and operated by AEON Co (M) while the remaining are leased. In addition, the group also operates four MaxValu supermarkets.

Like many retailers in Malaysia, AEON Co (M) saw its sales slip 5.44% year on year to RM811.1 million in the second quarter ended June 30 (2QFY2015), due to a slump in consumer sentiment and the implementation of the GST on April 1 this year. Retail Group Malaysia, which compiles retail data for Malaysia Retailers Association (MRA), reported that retail sales of the department store-cum-supermarket category contracted by as much as 12% in April-June 2015. MRA members in this retail sub-sector are projecting another quarter of contraction in the July-September period of -3.6%.

AEON Co (M) also saw its profit dip to RM15.66 million in 2QFY2015 from RM46.94 million a year earlier due to lower sales, higher operating costs and higher interest. The previous corresponding quarter had included a gain from the part disposal of AEON Taman Universiti.

In 1HFY2015, AEON Co (M) saw its net profit dive 31% y-o-y to RM65.06 million due to higher operating expenditure as a result of costs associated with new store openings. Revenue in the first half, however, improved by 6.37% y-o-y to RM1.92 billion, thanks mainly to contribution from its new stores.

In the first six months of this year, revenue from the retail segment grew 6.2% to RM1.65 billion while property management services increased 7.7% to RM270.2 million.

AEON Co (M) said in May that it had been accelerating its expansion to gain a bigger market share. It added that RM700 million had been set aside as capital expenditure for the development of its upcoming mall in Shah Alam, which is scheduled to open in the fourth quarter of this year, and a store in Kota Bharu that is slated for opening in the first or second quarter of next year.

Future stores can also be expected in Johor and Negeri Sembilan. In July last year, the company bought a 20-acre parcel in Batu Pahat, Johor. Then, in December 2014, it purchased 20.88 acres in Senawang, Seremban, for RM53.66 million to build a shopping centre.