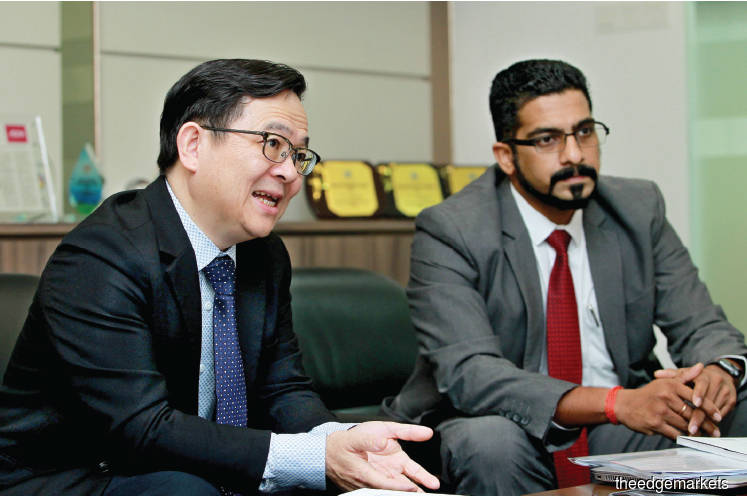 Lee (left) and Ajith being interviewed by The Edge Financial Daily. Lee says Aeon Credit is heeding BNM’s call for the country to go cashless. Ajith says the company is expanding into areas of transportation, food and beverages, and entertainment. Photo by Shahrin Yahya KUALA LUMPUR: Competition in the mobile wallet space is getting intense but Aeon Credit Service (M) Bhd’s new mobile e-wallet application and e-money card, which were introduced last October, are gaining good traction, with the latter on track to record one million cardholders within 12 months of its launch.

It’s about eight months since October and the non-bank financial services provider’s e-money card has registered over 700,000 cardholders, while its e-wallet app has seen over 200,000 downloads.

The group plans to eventually convert most of its current five million loyalty card users to the e-money card — the AEON Member Plus Visa Card — according to chief financial officer Lee Kit Seong. “We heeded the direction set by Bank Negara

Malaysia (BNM) for the country to go cashless. With this system, it is easier for them to secure their money as they don’t need to keep cash. It is also beneficial for users as they are able to track their spending live on the app,” Lee told The Edge Financial Daily in an interview.

Besides allowing users to pay for purchases, the e-wallet application also consolidates all AEON’s loyalty programmes onto one platform and enable customers to track their points, Lee added.

The group is now looking at forming partnerships as a sustainable way to further grow the application, said chief strategy officer Ajith Jayaram. “We’re looking at expanding into the areas of transportation, food and beverages, [and] entertainment — things that customers are regularly using. We’ve not yet locked anything down but we are actively looking to secure a partnership this year,” Ajith said in the same interview.

The new e-payment system is part of its long-term strategy to diversify its offering and stay relevant. It also obtained a money lending licence from the government in January this year, which boosted its share price. From RM15.50 a piece on Jan 15, the stock hit a high of RM17.20 in March, before paring some gains. It closed at RM16.42 last Friday, giving it a market value of RM4.12 billion. The licence is valid for two years from Jan 15.

Ajith said the money-lending licence approval would enable the company to market its products and services to more customers. “We also want to use this platform to expand some parts of our personal financing facilities and some parts of our small- and medium-sized enterprise SME financing. Under our current portfolio, we do product financing and have not been able to offer working capital to SMEs, for example. [But] with this licence, we can look into that,” he said.

In terms of revenue growth, with both the mobile wallet and money-lending initiatives being new to the group, those will take time, said Lee.

At present, the bulk of the group’s earnings or roughly 90% are contributed by its easy payment division, comprising personal financing and hire purchase financing for motor vehicles. The remainder comes from its credit card division, under which it has over 280,000 principal credit cards in circulation, to date.

Confident of another year of double-digit earnings growth

The group has enjoyed steady growth in revenue and profit over the past few years. In its financial year 2019 ended Feb 28 (FY19), net profit rose 18% to RM354.62 million from RM300.06 million in the previous year, on the back of a 11% revenue growth to RM1.37 billion from RM1.24 billion, on higher financing receivables.

The group is expecting demand to remain resilient in the domestic economy, so Lee is confident Aeon Credit will be able to post another year of double-digit growth in earnings for FY20.

“We will also be spending a few millions this year on ramping up our digital marketing initiatives. For our three-year investment plan, we are planning to spend around RM150 million in capital expenditure. This is for enhancing customer experience and to improve internal operations and productivity,” he added.

The optimism for good growth momentum is premised on not only new initiatives such as the e-wallet, but also the expansion of the group’s M40 (middle 40%) customer segment, who tends to spend more, said Ajith.

Ajith said Aeon Credit has traditionally focused on serving the B40 (bottom 40%) segment, with the demographic making up a good 70% of its customer base, while the M40 and above contributed the remainder 30%. Aeon Credit wants to rebalance the ratio to 60% and 40%, respectively, in the next few years.

“To sustain our growth, we will also need to cater to other groups such as M40. We do this by introducing the AEON platinum credit card, the [e-]wallet as well as consumer financing for higher-end products,” he added.