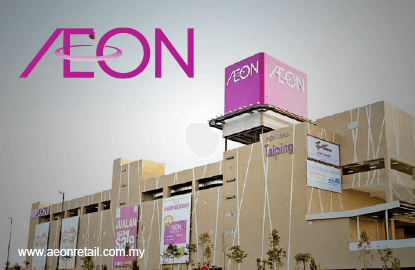 The Japanese retailer attributed the weaker earnings to lower sales, higher operating costs and interest expenses, as well as the results of 2QFY14 having included a RM14.2 million gain on disposal of an 18.18% stake in the land and building of Aeon Taman Universiti Shopping Centre.

Revenue for the current quarter came in 5.4% lower at RM811.1 million from RM857.72 million in 2QFY14 mainly due to weaker consumer spending after the implementation of the goods and services tax (GST) in April.

In a filing with Bursa Malaysia yesterday, Aeon said revenue from its retail business segment dropped 7.8% year-on-year to RM677.1 million in 2QFY15.

This is despite revenue for the first half rising 6.4% to RM1.92 billion from RM1.8 billion in 1HFY14, underpinned by contributions from its new stores.

Aeon said the economic and business environment in the second half will remain challenging with dampened consumer sentiment as a result of higher cost of living and impact from the GST implementation.

“The group will continue to deploy strategic marketing promotions including brand loyalty activities together with cost efficiency efforts to deliver a satisfactory performance in 2015,” it added.