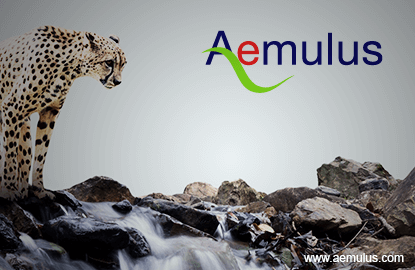 The loss-making company, in which Malaysia's sovereign wealth fund Khazanah Nasional Bhd has a 15% stake, said the purchase will enable it to construct and possess its own corporate office building, and allow it to consolidate its existing operations located in Bayan Baru and Batu Maung under one roof to improve and enhance operational efficiencies.

Aemulus expects to complete the proposed land acquisition by the second half of 2018, its bourse filing today showed.

With the new building to be erected, Aemulus said it will have ample room to grow and strengthen its core competencies, such as expansion of the research and development function, attraction and retention of talent based on its strategic location, and enhancement of supply chain management.

It plans to fund the land purchase via internal funds and bank borrowings. As for the building consruction cost, Aemulus said it can't ascertain at this juncture as it has yet to appoint consultants.

Listed in 2015, Aemulus said it plans to invest some RM25 million in the next three years in research and development, as well as in constructing its own office building.

Aemulus slipped into the red in the financial year ended Sept 30, 2016 (FY2016) – just a year after it was listed – with a net loss of RM2.73 million on decreasing revenue and increasing research and development expenses as it sought to expand its product portfolio and geographical areas across the Far East region.

Aemulus shares shed half sen to settle at 24 sen today, giving it a market capitalisation of RM109.5 million.