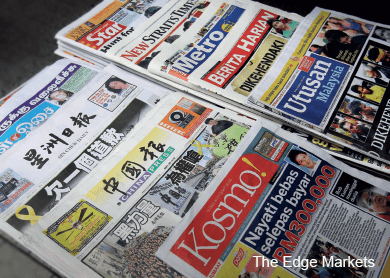 KUALA LUMPUR (Mar 13): The Malaysian media sector is expected to see a weakness in advertisement expenditure (adex) in the second quarter of 2015 (2Q15) following imposition of the Goods and Services Tax (GST) beginning April 1.

According to TA Securities Holdings Bhd, this is because consumers are likely to bring forward their expenditure to the first quarter of 2015 to avoid paying higher prices post GST.

This temporary surge is likely be followed by a slump in consumer spending, immediately after implementation of the GST.

"As such, we anticipate a distorted weakness in adex in 2Q15," TA said in a clients' note today.

“Although newspaper is classified as zero-rated item under GST, going into 2015, we may see an unusual advertisement expenditure (adex) pattern in 1H15, thus affecting revenue," it opined.

Notable media companies in Malaysia include Star Publications (M) Bhd and Media Prima Bhd while  unlisted ones include The Edge Media Group.

But the main challenge is to produce newspapers which come with great and relevant content that meet consumers' expectations, TA said.

TA published its media sector research note after analysts from the research firm attended a forum organised by the Malaysian Newspaper Publishers Association this week.

TA said: “For the case of Star Publications (M) Bhd, 2014 was a difficult year for the media industry but Star’s revenue just contracted by 1%.  For 2015, Star management guided that the number has been pretty decent, mainly generated from the print media."

"On top of that, they believe that news portal cannot survive alone without the money from the print media. Thus, print media is still an important component in the media industry” TA said.

It is worth noting that in the last 10 years, global newspaper readership has been declining with the advent of digital news platforms.

"This illustrates that public acceptance of newspaper is still good. Hereby, we believe that there is room for growth in the print business," TA said.