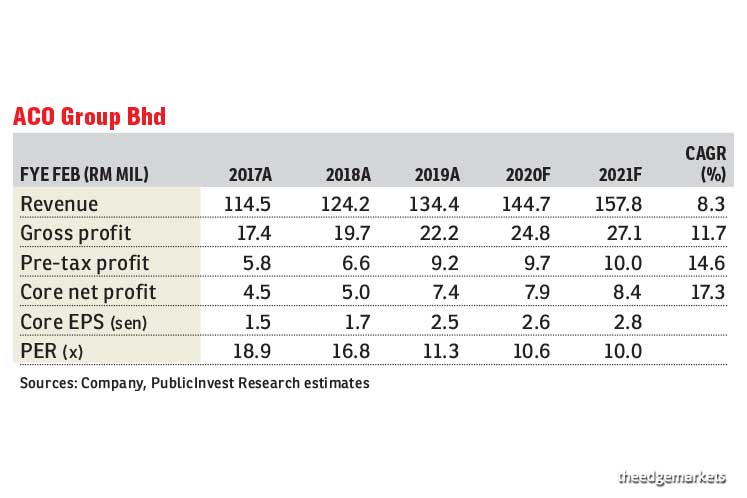 In addition, the group also distributes other products such as water plumbing materials, power tools and accessories, as well as close circuit television and alarm systems. The group is expected to list on March 18.

The group sells its products directly to industrial end-users who comprise electrical contractors, electrical product manufacturers, factory and business owners and others such as architects and interior designers, equipment and machinery repair and maintenance service providers. The group also sells its products to intermediary resellers which consist of distributors and retailers as well.

Apart from expanding its operational and logistic facilities, ACO intends to upgrade its information technology (IT) system while extending its product range post-IPO.

Its initial public offering is expected to raise approximately RM16.2 million from the issuance of 58 million new shares. Besides utilising 53.6% of the proceeds for capital expenditure, 26.1% of the proceeds are allocated for working capital, earmarking future growth.

ACO’s growth will be dependent on: 1) expansion of operational and logistics facilities; 2) upgrading of IT system; and 3) expansion of product range.

ACO’s competitive strengths includes: a) having an established track record of 29 years; b) carrying a wide range of electrical products and accessories; c) being an authorised distributor for 10 brands of electrical products and accessories; d) providing customer convenience and facilitating timely delivery; and e) having experienced executive directors and key senior management team.

Key drivers may include growth in the construction industry, and power and electrical industry.

Meanwhile for key downside risks include: i) competitive environment; ii) competition from e-commerce; iii) dependency on its efficiency to manage inventory; and iv) could lose its authorised distributorships. — PublicInvest Research, March 6