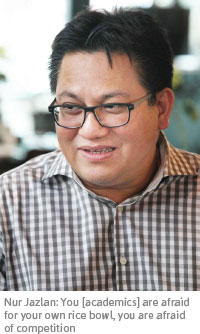 AN upcoming amendment to the Accountants Act 1967 will make it mandatory for all accountants, those with accounting degrees and otherwise, to obtain professional qualifications. Some academicians are dead set against it. They feel this would threaten both their livelihood and their relevance. So the question is being hotly debated in the industry.

Backtrack to 1967, only three universities — Universiti Malaya, Universiti Kebangsaan Malaysia and Institut Teknologi MARA (Advanced Diploma in Accountancy) — obtained recognition from the Malaysian Institute of Accountants (MIA) for their accounting programmes. Those who did not obtain their degrees from these universities had to qualify by sitting for professional examinations set by one of the 11 recognised associations listed in Part II of the First Schedule of the Act.

As Public Accounts Committee chairman and Member of Parliament for Pulai Datuk Nur Jazlan Mohamed points out: “That was consciously done to improve the bumiputera numbers and improve the number of MIA professional members. The policy at that time was to boost quantity but that can’t go on because the number of these people have overwhelmed the number of real professionals.”

The numbers speak for themselves. Out of the 30,000 or so members of the MIA, there are 19,000 professionals. And of those with professional qualifications, only 1,554 are bumiputeras.

One of the quick-fix solutions announced by Prime Minister Datuk Seri Najib Razak this year was to create a professional accounting centre at Universiti Teknologi MARA to boost the number of bumiputera accountants. He said the centre would offer four professional accounting studies —  ICAEW, ACCA, CIMA and Malaysian Institute of Certified Public Accountants (MICPA). He said through the programme, the government plans to boost the number of bumiputera accounting professionals from only 8% currently, to 25% by 2020.

Employers, naturally, are on the side of professional qualifications. PricewaterhouseCoopers executive chairman Datuk Mohammad Faiz Azmi says while the company may hire accounting graduates, it would not hire one that does not intend to do a professional course. “The difficulty we have is that when they come from universities, their knowledge of accounting and what’s needed is very much at a basic level and therefore we need to get them up the learning curve to be able to actually deal with financial reporting, with the complexities of doing audit and so on, very quickly.

“When you come to us, you must express a preference for doing one or the other of those professional exams. We leave the choice entirely up to you. It goes back to needs. If you’re dealing with a sophisticated bank or a conglomerate which sits in many other countries, the level of knowledge and expertise that you need to have is obviously on the higher scale. To be able to deal with these highly complex, very large organisations which operate internationally, we obviously need to employ people who have a much higher degree of understanding [of what is required].

“We don’t think that, to be able to service our clients, a graduate degree is enough. We feel that you need to supplement it with a professional exam to bring your skill sets up to a level that we can use,” he points out.

Faiz, who is also chairman of the Malaysian Accounting Standards Board (MASB), said the board is very concerned about the quality of accountants now as well as those who are coming out in the future.

“That’s why we got ourselves involved in the Hala Tuju (Way Forward) 3 discussions with the educationists on the revision of their syllabi. I was quite happy that the academics recognised the need to upgrade their syllabi to meet this new demand.”

Hala Tuju was initiated by the Ministry of Higher Education to deliberate on the standardisation of curriculum contents and the delivery process at institutions of higher learning. Hala Tuju 1 (2001-2005) called for the review and standardisation of university curricula in courses relating to the accounting profession and Hala Tuju 2 (2007-2013) called for greater standardisation and benchmarking of accreditation. Hala Tuju 3, which has yet to be implemented, will call for framework-based financial reporting and accountants to have professional qualifications.

Naturally, there have been rumblings of discontent among the academics who see their positions as being threatened. One of the more vocal opponents has been Universiti Utara Malaysia’s Professor Dr Kamil Md Idris, who presented a 10-point rejection of the MIA Education Blueprint in Utusan Malaysia and quieter voices of opposition have published papers speaking of the “coercion of academics by the MIA” in their universities’ journals. Their conclusion? If the amendment goes through, universities are at risk.

Nur Jazlan has this to say to them: “You are afraid for your own rice bowl, you are afraid of competition. After 15 years of the government helping to give you credibility and standing, you have not produced [enough] quality people sitting in high positions.”

Faiz is a bit more optimistic. He believes that academics can be brought around to adapt their teaching methods to something that is more relevant to the needs of accountants today.

“I understand that the universities are experimenting with some of the ideas and considering putting them into their syllabus. To me, that’s critical because framework-based teaching forces you to apply the principles to facts straightaway. The traditional way is to give the students all the rules and then you give them the case study at the end.

Malaysia adopted International Financial Reporting Standards (IFRS) for listed companies in 2012 and will do so for SMEs (small and medium-sized enterprises) in 2016. This will require a more mature band of accountants who will be able to make value judgements about whether a company is following the principle behind a standard rather than just complying with the letter of the standard in question. This means that the cookie-cutter approach to churning out accountants will become even more irrelevant.

Similarly, MASB is trying to facilitate cheaper examinations for both practitioners and academicians. “We managed to get a huge discount for lecturers to do e-learns (an online course to update one’s knowledge of IFRS) and we’ve got a major discount from the ICAEW to enable academics to participate in it,” Faiz adds.

Despite the discounts, take-up rate has been quite slow. “But it’s something that we’ve been encouraging academics to do. If you’re teaching IFRS, then it is important that you upgrade your knowledge,” says Faiz.

He thinks there is still a place for academia in the profession of accounting. He speaks about a recent challenge that the ISB set for the academics — to look at and critique the standards it had come up with. Of the six presentations that took place in Oxford University, the one that caught Faiz’s attention was by three professors who had gone through the 4,000-page transcripts from the Enron trial and concluded that the standards setter did not link the conceptual framework to the standards.

“Their recommendation was that standards setters should get the conceptual framework right. And it must be clear that it overrides the standard, so you cannot use the wording of the standard to get around the principle,” explains Faiz.

It was a refreshing perspective for him. “This is the first time I’ve ever had anyone challenge our standards from an academic point of view and I welcome that. I welcome someone who is able to examine the impact of these standards and highlight to us things that don’t make sense.”