Abandoned hotel project in KL may be revived 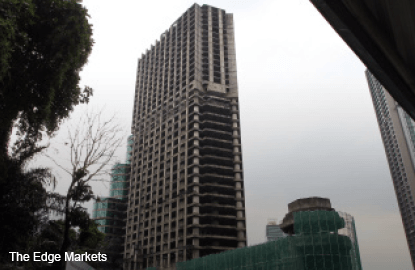 EFFORTS to revive a stalled project located on a prized piece of land at the junction of Jalan Ampang and Jalan Sultan Ismail Kuala Lumpur — which was once earmarked for The Grand Duta Hyatt Hotel — appear to have been re-mobilised.

DutaLand Bhd’s subsidiary Duta Grand Hotels Sdn Bhd made a fresh application to Dewan Bandaraya Kuala Lumpur (DBKL) last month for approval to develop the site, documents sighted by digitaledge Weekly show. Moreover, there appears to have been some activity at the site where a partially built structure stands. Workers have been spotted and part of the safety netting that was visible earlier this year has been removed. This, observers say, is possibly to clean up and fix a new netting prior to construction.

Work on the 2.36-acre plot halted 17 years ago in July 1998 following the 1997/98 Asian financial crisis. It is understood that the initial approval may have been for a gross floor area of 1.89 million sq ft.

While it is widely known that the plan at the time was to build a 52-storey building comprising a hotel, retail lots, offices and serviced apartments, industry players opine that the developer may now consider building a taller structure, possibly even

60 storeys, given that the approving body is now granting higher plot ratios in the city centre.

Construction of the existing building is believed to have halted at the 29th floor. An earlier proposal stated that apart from the retail and office component, a 375-room luxury hotel and 182 serviced apartments were also on the cards.

The new application may be the group’s fourth attempt to restart the project, which is located opposite IGB Corp Bhd’s Renaiwssance Kuala Lumpur and next to Sunway Group’s Sunway Tower (previously Wisma Denmark). A report indicates that the project was to have recommenced in 2003 but it did not. Then in January 2010, the then KL mayor Datuk Ahmad Fuad Ismail said DBKL had in mid-2009 approved the development of the project but no work started.

In August 2012, Duta Grand Hotels once again submitted a plan for approval by DBKL. Still, nothing transpired.

It is unclear why DutaLand (fundamental: 1.90; valuation: 1.70) has chosen to restart the project now and whether it is tying up with a partner for the project. DutaLand would not reply to questions sent by digitaledge Weekly.

But in its FY2014 annual report, DutaLand indicated that “the board will look into ways to re-strategise the group’s businesses, including seeking joint-venture partners for its property development projects and/or changing the product mix to adapt to market demand”.

A search on the Companies Commission of Malaysia’s website reveals that DutaLand owns a majority stake of 78.39% in Duta Grand Hotels. The other shareholders are Barisan Nominees (Tempatan) Sdn Bhd (5.4%) and Duta Credit Sdn Bhd (16.21%).

It is worth noting that Duta Grand Hotels, which was previously known as Kuala Lumpur Landmark Sdn Bhd and Duta Grand Hyatt Sdn Bhd prior to that, has satisfied all charges created between 1995 and 2005.

The history of this project goes back two decades. Hotelier The Hyatt Group had in 1994 awarded the contract to develop the then RM570 million Grand Hyatt Duta to Kuala Lumpur Landmark, which was a subsidiary of Olympia Industries Bhd. Mycom (which is today DutaLand), the holding company of Olympia, subsequently teamed up with Kuala Lumpur Landmark to develop a 52-storey building to house its headquarters and the hotel.

Following the 1997/98 economic downturn, Mycom and Olympia chalked up debts of RM1 billion and had to be restructured. The restructuring was completed several years later and Mycom was requoted as DutaLand in 2007. DutaLand and Olympia are now sister companies. DutaLand’s business today is oil palm plantations and property development and investment while Olympia’s core business is gaming and stockbroking, although it is also in property management and leisure.

For the nine months ended March 31, 2015, DutaLand posted a group revenue of RM33.72 million, down 25% from a year ago. The decline was attributed to a drop in contribution from the plantation division due to lower average fresh fruit bunch prices and production volume as well as a lack of development activity at its property division.

In FY2014, DutaLand recorded a net profit of RM75.1 million against a net loss of RM18.56 previously, mainly due to a gain from the disposal of Olympia Plaza Sdn Bhd and compulsory land acquisition by the Sabah government.

Tan Sri Yap Yong Seong, better known as Duta Yap, is the group managing director of both DutaLand and Olympia. He and his wife Puan Sri Leong Li Nar are major shareholders of DutaLand.

Note: The Edge Research’s fundamental score reflects a company’s profitability and balance sheet strength, calculated based on historical numbers. The valuation score determines if a stock is attractively valued or not, also based on historical numbers. A score of 3 suggests strong fundamentals and attractive valuations. Go to www.theedgemarkets.comfor more details on a company’s financial dashboard.