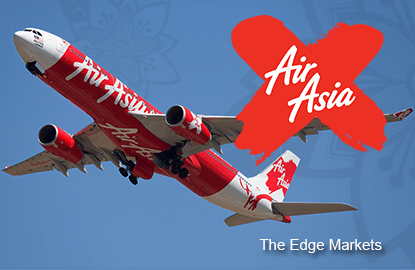 "With every 10 sen movement in the ringgit against the US dollar, the airline will recognise either savings or expenses of approximately RM50 million per year," said AAX in a statement today.

AAX  blamed the lower load factor to a halt in marketing activities, the Middle East respiratory syndrome outbreak in South Korea and the massive earthquake in Kathmandu, Nepal.

Looking forward, AAX said advance bookings indicate that recovery in passenger and yields evident in 2QFY15 will hold up for the rest of 2015.

"Average fares are expected to be higher than in the prior quarter as marketing activities are resumed and better price discipline returns to the market. The airline remains on track with its turnaround plan with a focus on optimising fleet size and improve yields and loads," said AAX.

"We’ve seen return of business in 3QFY15 onwards as forward bookings for the second half of the year is promising. We are optimistic in reaching a turnaround this year as we’ve set ourselves the task of getting AirAsia X to a better financial footing," AirAsia X group chief executive officer Datuk Kamaruddin Meranun said in the statement.

Nevertheless, AAX is cognisant that a severe weakening of ringgit will adversely impact its financial performance.

"However, yields and loads are expected to be stronger as a result of a more rational pricing environment," it added.

In the effort of reducing the forex’s impact, the airline is intensifying sales from stronger currency markets such as the Australian dollar and other currencies to offset US dollar bills.

It sees upside in yields with the new routes launch such as Sapporo and Hawaii, improved ancillary products and services, intensified marketing especially in Australia and the strategic network consolidation.

"Taking into account the recently completed rights Issue with warrants and the initiatives intended, we believe that we have taken the necessary steps to rationalise our operations and improve financial performance," said AAX.