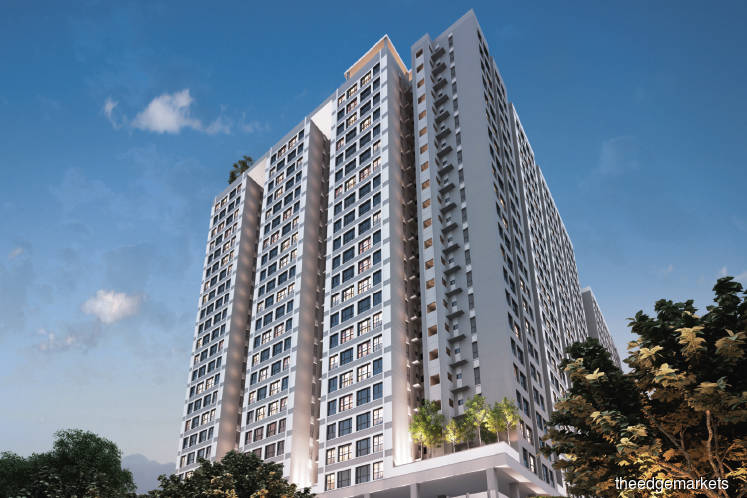 Artist’s impressions of the gymnasium at Canopy Hills

Artist’s impressions of the aqua gymnasium at Canopy Hills Land Pacific Development Sdn Bhd has sold 73% of the open-market residential units at Canopy Hills since the initial launch of the serviced residence in April last year, according to managing director Eddy Tan.

Sited on a 5.62-acre parcel in Kajang, Selangor, the RM448 million development will comprise two blocks with 1,271 open-market units and 318 statutory affordable residential units. There will also be eight retail units with built-ups of 550 to 1,800 sq ft on the ground floor that are not for sale.

Priced from RM280,000 each, all the residential units will have two bedrooms. The built-up of a typical unit will be 590 sq ft while that of the garden units will be between 660 and 890 sq ft.

Tan tells City & Country that the remaining open-market units have been booked. Of the statutory affordable units, which were launched in March, about 10% have been sold and 60% taken up.

“We did a market research and saw demand for two-bedroom units as most projects nearby offer three bedrooms. Of course, we have buyers who want four bedrooms and so they buy two units,” he says.

“People are happy with the pricing and offering. Initially priced at RM250,000 per unit during the launch, they are now priced from RM280,000 each. The project gives a different lifestyle offering with the facilities. With the price range, it can be a starter home for many people.”

Slated for completion in the second quarter of 2022, Canopy Hills is targeted at first-time homebuyers, upgraders, young couples and investors. Tan says the buyers are mostly from the surrounding areas such as Kajang and Bangi.

Within a 1km radius of the development are amenities such as the Kajang 2 KTM station, Kajang 2 Shopping Mall and SJK (C) Kajang 2. It is also close to Universiti Kebangsaan Malaysia, German-Malaysian Institute and the Kajang Bus Terminal.

After Canopy Hills, Land Pacific is planning its first overseas venture in Makati, Manila. Tan says the developer will work with a local partner and will be demolishing an existing office building to develop a RM500 million strata office building.

“We had acquired an old office building in Makati earlier and we will tear it down and build another office building in the first half of next year. The Philippines is one of the fastest-growing countries in terms of GDP (gross domestic product) and the demand for Grade A offices there is strong,” he explains.

“We will sell the building after we build it and we plan to sell it off by floor so as to allow investors to own a piece [of property] in the CBD (central business district). The plan is to have 8,000 sq ft of space on each floor and we aim to have 35 floors. We might also keep a few floors as our office as we may be looking at developing more projects there.”

In the first half of next year, Land Pacific is also looking to launch a project in Sungai Long, Selangor. There will be three phases, and each will occupy about five acres and have a gross development value of about RM200 million, says Tan.

“The first phase will be a residential development with 284 condominiums and we are currently working on the plan. Also in the pipeline are two projects — in Ampang Hilir and Bukit Ceylon — but these will be [developed] at a later stage,” he adds.

When commenting on the market prospect, Tan says the developer is cautiously optimistic as the transaction volume and value are increasing based on data from the National Property Information Centre.

“We hope for a turnaround in the market soon,” he concludes.