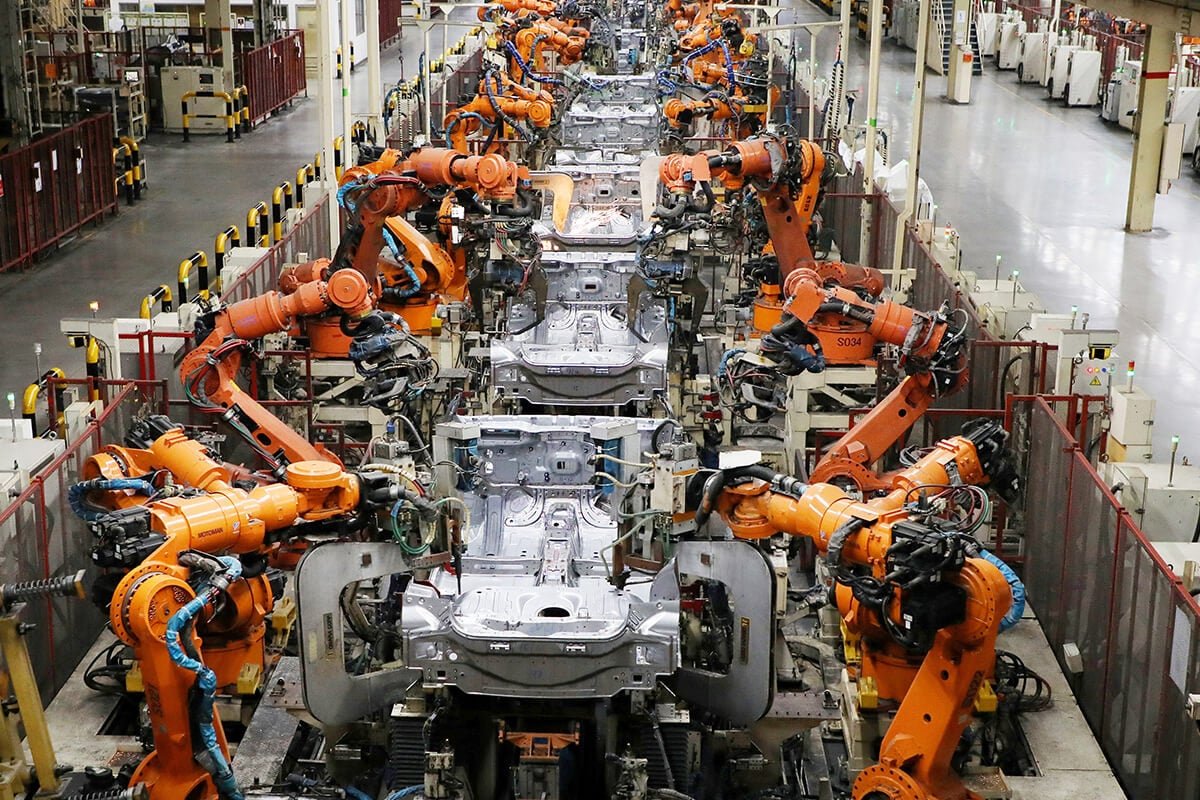 To survive the new normal, enterprises are speeding up the implementation of Industrial Revolution 4.0 (IR4.0) to future-proof their businesses. Going forward, new technologies and innovations are expected to gain traction.

The global business and manufacturing ecosystems have been upended by the coronavirus pandemic, reinforcing the urgency for automation as governments and business leaders focus on reinvigorating the languishing economy, say industry experts.

“The crisis has spurred further technology innovation and adoption, the rise in demand for contactless technology, and changes in the business world,” says Tan.

In fact, with the Covid-19 restrictions and ongoing physical-distancing protocols in place, businesses have no choice but to transform their business models and step up their efforts in adopting digital technology, he adds.

Citing EY’s “COVID-19: Business impact survey”, Tan says over a third of Malaysian companies — 37% SMEs and 32% large and listed companies — are taking active measures to expand or upgrade their technology capabilities in response to the pandemic. The crisis has spurred further technology innovation and adoption, the rise in demand for contactless technology, and changes in the business world. - Tan

This is because the pandemic has revealed how vulnerable global supply chains can be and has motivated manufacturers to rethink IR4.0 adoption in a more cost-effective manner, especially in areas of customer engagement, supply chain, production and operation strategies, says Tan.

“Manufacturers, especially the SMEs, were slow to invest in digitalisation before the crisis. The digital imperative has now been augmented and accelerated by the sudden impact of Covid-19,” he says.

The outbreak is not just speeding up the implementation of IR4.0 but also has also served as a “wake up call” for manpower-heavy industries, says Alvin Koh, the founder and CEO of Blinkware Technology Sdn Bhd, which has created a range of artificial intelligence (AI)-powered technologies.

While IR 4.0 technologies have proven to be able to entirely transform the manufacturing value chain, prior to the Covid-19 pandemic, many still doubted its worth and refrained from taking the necessary steps to future-proof their business.

Consequently, many of these businesses were some of the worst affected at the height of the ravaging pandemic, says Koh.

“When we jump back into [full capacity], automation will be on top of the agenda for many factories because when the Movement Control Order (MCO) was imposed at the peak of the virus spread, it was a wake-up call for many businesses. Today, business owners are putting this as a priority of investment so that they can automate some levels of processing, especially those that require intense labour.

“And, it’s not about reducing the number of people hired but about making work more efficient. After doing the same inspection for 12 hours, people are bound to get tired and there is ample evidence that these companies are not achieving the quality they strive for,” he says.

Factories producing non-essentials were completely crippled while those that were producing essential supplies were hard-pressed trying to meet the explosion of demand, says Koh.

doing QAQC checks each day. A global food manufacturer that we now work with had 2,500 people doing quality checks every day for 15 to 20 minutes each.

“Some of these factories were bleeding RM3 million a day during the MCO because their employees couldn’t come to work to keep production running,” he says.

But for manufacturers that had embraced full automation or partial automation, it was business as usual, if not better, he says. The misconception is that companies would have to completely reboot their operations by automating their entire factories, which can be daunting. When we jump back into [full capacity], automation will be on top of the agenda for many factories because when the Movement Control Order (MCO) was imposed at the peak of the virus spread, it was a wake-up call for many businesses. - Koh

In reality, however, one could start by identifying pain points and work incrementally towards rationalising automation, says Koh.

“You could just start with using AI-powered inspection technology where you would get real-time data, which tells where and when issues are happening. For example, after corn cereal is baked, they are sorted based on colour, shine and size. With the right monitoring technology, one will be able to get real-time data on the oven temperature and other supply chain issues that are affecting the

cereal output, rather than manual recording of data, which could set operations back by at least a week before an issue can be resolved.

“Manufacturers can’t remedy these issues fast but with automation, they can be circumvented. It is not immediately necessary to adopt full-blown automation. Manufacturers have just identified where the issues are going to be and take it step by step,” he says.

“When we speak to manufacturers, many think IR4.0 is about futurists manufacturing where products are built by robots but when we ask where their biggest issues are, they tell us that they have 300 people checking for quality and only 10 workers in production. And, only when they vocalise this, they realise where the issues truly are. “To me, robotics is not really critical at this point in time. It is very good to have but it is very costly. But is it useful when one hasn’t even resolved other basic pain points that lead to where the robotics are needed?” poses Koh.

This is the reason Koh encourages companies to consider partial automation in critical areas that will eventually result in a faster return on investment as it would boost productivity immensely in the near term.

While the upfront cost of automation may be a deterrent compared to cheap foreign labour, in the long run, it will ensure efficiency of one’s supply chain and the ability to increase the capacity of output at times of high demand, says Koh.

However, manufacturers will eventually have to wean off their dependency on unskilled migrant labour as the Malaysian government moves to reduce the nation’s reliance on foreign workers.

AI to gain the most traction The rush to build data centres will accelerate in the future because most countries forbid key pieces of sensitive data ... from being stored outside the country’s physical borders. - Raju

According to Raju, AI will gain the most attention and be the hottest bet in town.

This will be followed by big data analy-tics (BDA), the base on which AI will ride.

bon is a global community of consultants that believes technology adoption can be improved through open-source sharing of free advisory knowledge.

And to support all this cloud technology, cybersecurity is important, he adds. Cloud-based solutions have been paramount as employers organise remote work capabilities and stay connected using cloud-based conferencing tools.

“Cybersecurity (is vital), because of the massive increase in hacking incidents. IDC estimates that companies in both the private and public sectors will invest more than US$28 billion on security-related hardware, software and services by 2022, up from US$16 billion in 2019. The massive increase in malware and hacking incidents during Covid-19 is another wake-up call for all companies to take both, cloud and cybersecurity very seriously,” says Raju.

Lastly, he adds that data centres are the heart and soul of the enterprise, whether in-premise or on cloud. “That’s because all cloud platforms are hosted on data centres. The rush to build data centres will accelerate in the future because most countries forbid key pieces of sensitive data — such as healthcare records, government files, defence documents and banking transactions — from being stored outside the country’s physical borders,” he explains.

To facilitate this transition, government agencies such as the Malaysia Digital Economy Corporation (MDEC), the Malaysian Investment Development Authority has been facilitating grants, giving SMEs guarantees of RM500,000, or 70% of investment costs, as an incentive to invest in automation and modernisation. SMEs were forced to remodel their businesses and use digital platforms to ensure their sustainability. Agility and ability to quickly adapt to the new norms are the prerequisite to be successful in this new environment. - Aria

According to Aria Putera Ismail, CEO and group president of SME Bank, allocation of RM500 million to RM200 million from Bank Negara Malaysia’s Automation & Digitalisation Facility and RM300 million from SME Bank are dedicated to helping companies in the services and manufacturing sectors.

Aria says the purpose of the STTF is to increase the efficiency, productivity and market penetration of SMEs, which include the adoption of IR4.0 technologies.

“SMEs were forced to remodel their businesses and use digital platforms to ensure their sustainability. Agility and ability to quickly adapt to the new norms are the prerequisite to be successful in this new environment,” he says.

Furthermore, the urgency for technologies is motivating entrepreneurs to innovate for more cost-effective solutions, adds EY’s Tan. “Entrepreneurs are already beginning to innovate for the new normal. To participate and seize the upsides, businesses must address the short-term needs and innovate for long-term value.

“Downturns also create opportunities for entrepreneurs — and corporate intrapreneurs — to build great business ideas in capital-efficient ways. Top talent becomes more accessible; support services become cheaper and a variety of assets, from real estate to equipment, become available for repurposing. If you don’t build it, a disrupter will,” he says.

It is crucial to remember that IR4.0 is no longer just about abetting well-run businesses to run better by achieving competitive advantage, cost reduction, productivity, sustainability and innovation. “It could be the critical factor that determines if an organisation can survive and thrive in the new norm that emerges beyond the Covid-19 crisis.

“IR4.0 will play a vital role in businesses’ consideration of their strategy across the now, next and beyond horizons: solving the now, exploring the next, and imagining the beyond,” he adds.

The primary focus of the Fourth Industrial Revolution (IR4.0) has been the integration of robots, interconnected devices and fast networks of data within. And, this has fundamentally altered the way we live, work and relate to one another.

According to EY’s Megatrends 2020 and Beyond report, the emergence of artificial intelligence (AI), robotics, and augmented and virtual reality (AR and VR) will become increasingly lifelike and act autonomously.

Moving forward, these technologies are expected to further complement and augment human labour with intelligent robots to serve existing needs.