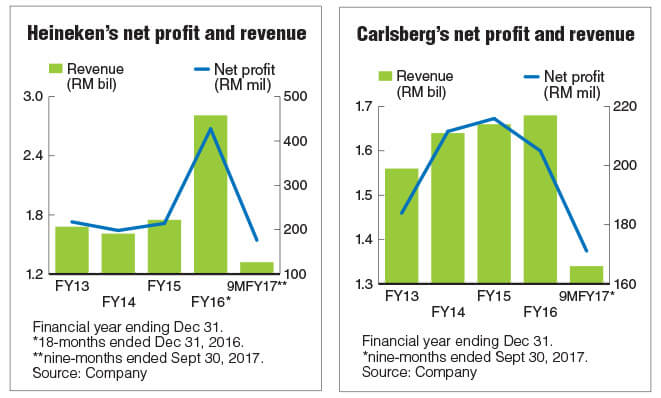 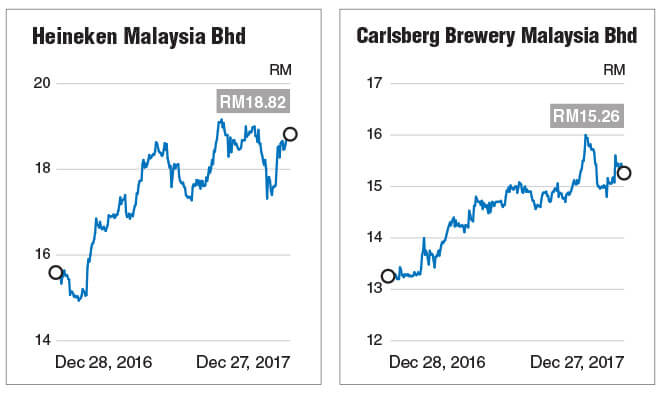 KUALA LUMPUR: The year 2018 is largely seen as one that will remain challenging to local breweries, but higher disposable income and the upcoming World Cup 2018 in Russia will most likely support the sector’s earnings in the new year, according to TA Securities Holdings Bhd senior investment analyst Tan Kam Meng.

“Note that due to the time difference between Malaysia and Russia, we can expect one match to kick off at 8pm Malaysian time, every day, during the event,” said Tan in an email to The Edge Financial Daily, who foresees that the largest global football event held every four years will spur beer consumption worldwide.

Though Tan does not expect any increase in sin taxes — the common term for taxes levied on alcohol and cigarette players — he said 2018 will still remain challenging, due mainly to the rise of contrabands.

“The new regulation on the legal purchasing age for alcoholic beverages, which raised the age from 18 to 21 effective Dec 1 2017, may encourage youngsters to switch to easily-available contrabands,” he said.

Carlsberg Brewery Malaysia Bhd (Carlsberg Malaysia) is optimistic that its efforts to drive consumption through various integrated consumer promotions will spur sales growth, even though it anticipates consumer spending will remain prudent next year, according to Carlsberg Malaysia managing director Lars Lehmann.

“As outlined in our SAIL’22 strategies, we have many exciting campaigns for the year 2018: With an integrated Chinese New Year campaign in both the Malaysia and Singapore markets in the first quarter (1Q), football championships-related campaign in 2Q, as well as innovative projects in the pipeline to spur consumption, explore new frontiers and create more drinking occasions,” said Lehmann in an email exchange with The Edge Financial Daily.

Rolled out across its Malaysia and Singapore operations at end March, SAIL’22 sets the strategic direction of the group for the next seven years till 2022. It aims to strengthen the group’s core business, take advantage of growth opportunities, and deliver enhanced shareholder value. The strategy is supported by an efficiency and value creation programme named “Funding the Journey”, that will unlock resources and release funds for investments amid a more challenging operating environment.

As 2017 draws to a close, Lehmann also shared that he is positive that Carlsberg Malaysia is on track to deliver the targets outlined in the company’s 2017 strategic priorities under SAIL’22.

“In both our Malaysia and Singapore operations, our flagship brand Carlsberg and its new product innovation Carlsberg Smooth Draught registered growth in the mainstream while our premium brands, especially Kronenbourg 1664 and Somersby cider, doubled its growth rate this year as compared with 2016,” said Lehmann.

“We are also on track to deliver high and stable dividend yield for our shareholders,” he added.

Nevertheless, in anticipation of weaker consumer sentiment after the New Year and Chinese New Year festive periods, Lehmann urged the government not to raise excise duties on locally produced beers, as doing so will penalise the local brewers that manufacture and sell duty-paid beers. “Further hikes on duties may result in consumers sourcing for illicit beers when duty-paid beers become less affordable,” said Lehmann.

The only other listed brewery on Bursa Malaysia is Heineken Malaysia Bhd, which recorded stronger performance in 3Q this year, on the back of improved commercial execution and cost management, despite a slower start to financial year 2017 (FY17).

Besides a more favourable brand mix, the company’s improved earnings performance was “partly due to easier comparatives in 3QFY16 as the market last year was recovering from volume impact resulting from a price increase that occurred in July 2016,” said Heineken Malaysia managing director Hans Essaadi in an email response to The Edge Financial Daily.

Essaadi said he is confident that the company will end the year on a commendable note. By focusing on innovation in FY17, Heineken has gained traction through the launch of its mainstream cider brand Apple Fox Cider, he said.

“Our investment in cider is bearing fruit, as seen in our latest 3Q results, through the production of Strongbow Apple Ciders and Apple Fox at our Sungei Way Brewery,” said Essaadi, adding that Heineken Malaysia has also launched its zero-alcohol Tiger Radler 0.0% Lime Mint to cater to the growing demand for low- and no-alcohol products. In terms of cost efficiency, he said Heineken Malaysia will continue leveraging on Heineken’s global scale to unlock savings across the value chain.

“Based on our stock recommendations, that is Heineken Malaysia (hold; target price [TP]: RM19.14) and Carlsberg Malaysia (buy; TP: RM18.06), we expect both companies’ share prices to be well-supported at current levels. I believe the share prices can still go higher next year,” said Tan, as he pointed to the World Cup 2018 as a near-term catalyst.

Meanwhile, to better curb the rise of contraband beers in the country, Lehmann said the brewery has been working closely with the relevant authorities and the Royal Malaysian Customs (Customs) to step up enforcement efforts.

It is also working with the ministry of finance, Customs and the Performance Management and Delivery Unit (Pemandu) to develop strategies to reduce contraband and help the government address loss of tax revenue, in the form of unpaid excise, import duties and the goods and services tax, from contraband consumption, said Lehmann.

“We are also hopeful that the government would consider lowering the excise duties of locally produced beers so as to make them more competitive, hence, less incentive for the trading of illicit products,” Lehmann added.

Essaadi highlighted that if the contraband issue is addressed effectively, it represents a win-win scenario for the government and the industry, with additional revenue for both.

He also highlighted that the current tax regime on beer, as compared with wine and spirits, remains inequitable. “Beer and stout, which are typically of lower alcohol by volume, are taxed at a higher rate than wine and spirits, which contain higher alcohol levels,” he said. Heineken, he added, will continue engaging with the government to create greater understanding on this matter.