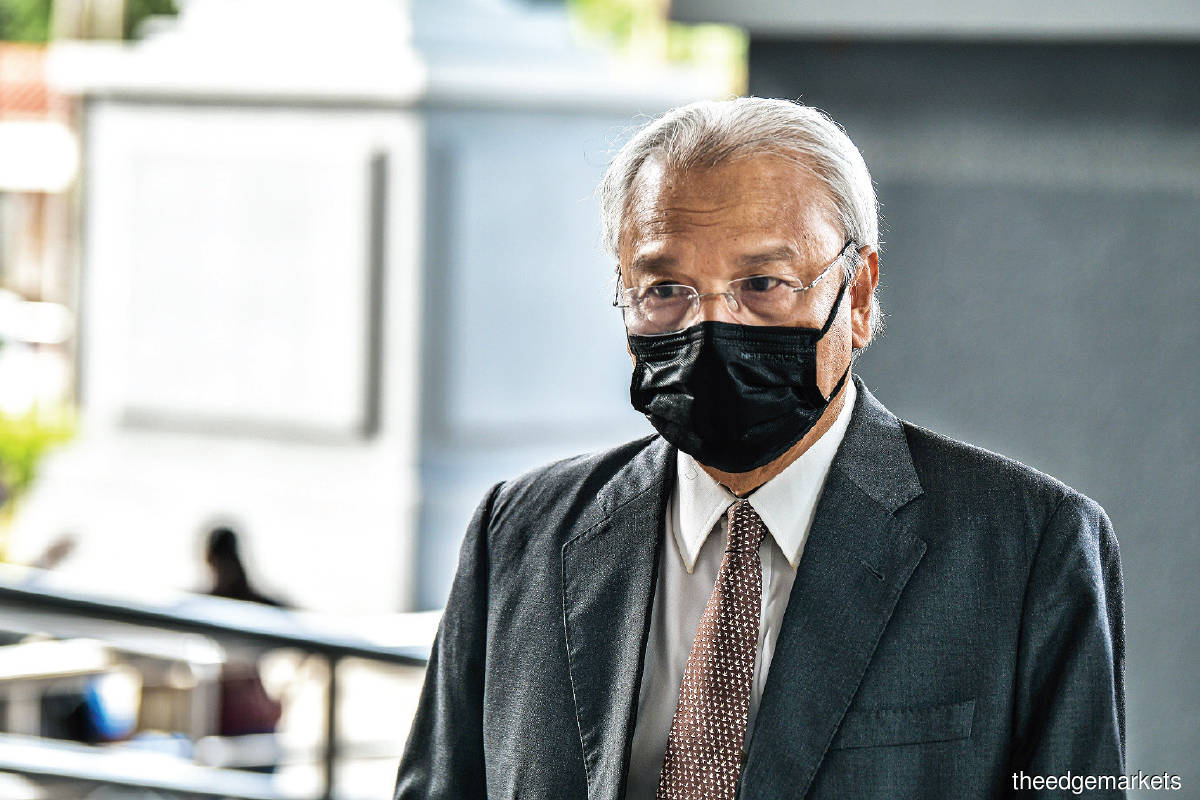 Husni said he did his best to warn ex-PM Najib against setting up (now-defunct) 1MDB, only to be rebuked (Photo by Zahid Izzani/The Edge)

Husni countered angrily that he had done his utmost to warn his then-boss against setting up the company, only to be rebuked and subsequently coolly rebuffed when he pointed out to Najib that US$700 million (RM3 billion) had been inexplicably diverted from 1MDB. Najib’s insouciance and lack of concern over the misdirected funds further confounded him, Husni said.

Ultimately, Husni agreed that he consigned himself to “following orders” — or “Saya yang menurut perintah”, as he put it — after Najib had told him not to interfere in the state-owned strategic investment company.

The 20th prosecution witness in the 1MDB-Tanore trial against Najib, Husni told the court that although he had signed off on certain documents pertaining to 1MDB, his signature was merely a formality as the transactions had been approved at the top by Najib, who was also then Minister of Finance.

Moreover, he pointed out that the way 1MDB was run, as well as its subsidiary company SRC International, was unlike any other Minister of Finance (Incorporated) (MoF Inc) company as all correspondences pertaining to the company went to the Prime Minister’s Office (PMO) at the time, and Najib had not told him the reason why this was done.

“These two projects, namely, 1MDB and SRC International Sdn Bhd, did not follow the standard operating procedures for companies under the Ministry of Finance. It all came from the top,” he snapped under cross-examination. “Najib did not tell me further why 1MDB needed to be supervised by the PMO.”

In his sworn witness testimony to the court, Husni said that as second finance minister, he had warned Najib not to establish 1MDB without a feasibility study, and subsequently — verbally and in writing — not to allow 1MDB to enter into a joint venture (JV) with PetroSaudi International.

He pointed out that PetroSaudi was still exploring for oil at the time and if they did not find it, the investment would be “burned”. Moreover, PetroSaudi did not have any track record in the sector and that co-opting national oil company Petroliam Nasional Bhd (Petronas) would make better sense if required.

“(PetroSaudi) had no experience in petroleum or excavation,” he said, adding subsequent issues relating to 1MDB were not brought to his attention, and that whenever a 1MDB-related matter was brought to the cabinet, he would abstain from the decision-making process and would not voice his opinion.

1MDB signed a JV with PetroSaudi on Sept 28, 2009, and US$1 billion was transferred out of 1MDB for investment purposes two  days later on Sept 30.

Still worried the deal would turn out to be a scam, Husni said that in August 2010, he wrote a private letter to Najib expressing his concerns relating to 1MDB and fears that it would invite controversy and could jeopardise the government and the prime minister.

He said under cross-examination  by Shafee that he had personally sent the letter to Najib’s late principal private secretary Datuk Azlin Alias, but did not receive any response from Najib. Husni:  Never before have I sent a letter that Najib responded to.

Husni: Those were correspondences through MoF Inc. When I wrote personally, I wrote in English. I have never in my life written in Jawi.

In relation to the US$700 million that was diverted to Good Star Ltd following the signing of the JV with PetroSaudi (see “Deutsche abided by SOP in fraudulent transfer, says former MD”), rather than the actual JV company, Husni said that he had raised the matter with Najib, but Najib insisted that Good Star was a subsidiary of PetroSaudi.

“If I were the top leader, I would definitely be shocked and immediately demand for action to be taken. He (Najib) was ‘relax je’,” he said, noting such a situation was concerning as it would have also affected the financial position of the Malaysian government as 1MDB was an MoF Inc company.

Shafee pointed out that this was what the board represented to Najib and that Najib was merely relaying the information to Husni.

“If I were the prime minister, I would be worried about this. The prime minister had the power to replace the board of (directors of) 1MDB. If he knew, he should have replaced them. I would’ve done something about this,” Husni said of Najib’s non-action against the 1MDB board over the transfer of such a huge amount to a wrong entity.

In the opening statement of the trial in 2019 by lead prosecutor Datuk Seri Gopal Sri Ram, he said that the prosecution would show that Najib had received US$20 million in two tranches into his personal accounts from Jho Low, from the US$700 million transferred to the fugitive financier.

The trial resumes on Aug 15 before Justice Collin Lawrence Sequerah.

Datuk Shahrol Azral Ibrahim Halmi’s name has cropped up a number of times over the past weeks in witness testimony in the 1MDB-Tanore trial of former prime minister Datuk Seri Najib Razak. This is perhaps not surprising, given that over the seven to eight years that he helmed (now-defunct) 1Malaysia Development Bhd (1MDB) as CEO, several massive — yet dubious — loans and investments were undertaken by the state-owned strategic investment company.

Najib’s legal team claims that Shahrol, as the company’s CEO, is to blame for the billions of dollars lost. An investigation into 1MDB and its losses by the Public Accounts Committee (PAC) of Parliament in 2016 had, after all, also recommended that Shahrol “needs to take responsibility for those weaknesses and blunders” that happened in 1MDB.

However, last week, former finance minister II Datuk Seri Ahmad Husni Hanadzlah pinned 1MDB’s failings squarely on Najib, in essence pointing out that Shahrol may have been involved in the illicit activities that left 1MDB neck-deep in debt but, ultimately, he was taking orders from Najib.

However, according to theedgemarkets’ earlier reports on the trial, Bakke had said that he did not suspect that the management of 1MDB, led by Shahrol, was involved in criminal activities, but that he was frustrated with them for defying board instructions.

Questioned by lead prosecutor Datuk Seri Gopal Sri Ram, Husni pointed out that Shahrol was only terminated from 1MDB in 2016 — some eight years after his appointment, and at a time when the company was already on its knees. Moreover, Husni observed that having terminated Shahrol, Najib then appointed him to the Prime Minister’s Office.

Sri Ram: It was put to you that Bakke had described Shahrol as a criminal. Are you aware from whom Shahrol was taking instructions?

Sri Ram: By “Najib”, you mean the accused?

Interestingly, Shafee had also asked Husni during cross-examination whether he knew where the RM700 million which was siphoned from the RM5 billion, 30-year government-guaranteed Islamic Medium-Term Notes (IMTN) issued by 1MDB’s previous incarnation Terengganu Investment Authority, had gone to.

Shafee alleged that former second finance minister Tan Sri Nor Mohamed Yakcop and ex-Bank Negara Malaysia governor Tan Sri Dr Zeti Akhtar Aziz had been beneficiaries of the siphoned funds. However, Husni replied that he was not aware of it.

Earlier in the year, the Malaysian Anti-Corruption Commission (MACC) said it was investigating Zeti, her husband Datuk Tawfiq Ayman and Yakcop for allegedly receiving funds siphoned from 1MDB.