1MDB Update: Besides Jho Low, who made millions from the Big Flip in 2009? 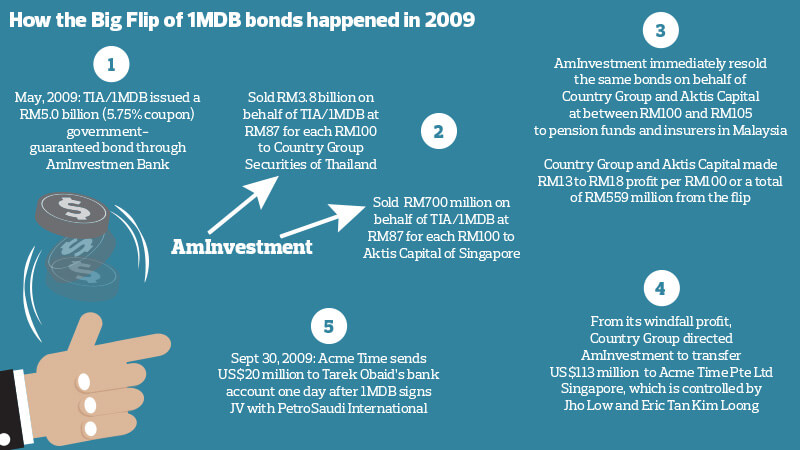 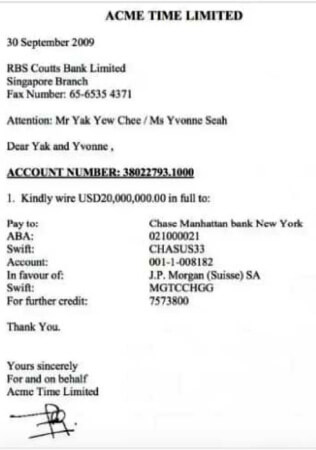 A Bloomberg newsbreak on how Low Taek Jho, or Jho Low, made millions from a 2009 bond sale has put the spotlight on the first debt issued by 1MDB, when it was known as the Terengganu Investment Authority (TIA).

The RM5.0 billion bond sale was arranged by AmInvestment Bank Malaysia and approved by TIA chief executive Datuk Shahrol Halmi despite the objection of a shareholder, the Terengganu government.

Jho Low was the official adviser to TIA, which was subsequently taken over by the Minister of Finance Inc and renamed 1Malaysia Development Bhd.

The 30-year Islamic bonds, which pay a coupon rate of 5.75%, were sold at a steep discount by AmInvestment  on a bought deal and not through a tender, raising a hue and cry among bankers at the time. The then CEO of CIMB Bank Datuk Seri Nazir Razak complained to both Bank Negara and the Securities Commission about how the bonds were sold and why the government-guaranteed bonds had to pay a high interest of 5.75% and yet sold at a discount.

Sources say the regulators made some enquiries but did not pursue the matter further.

But investigators are now looking into it and have discovered the following:

1.     AmInvestment sold RM3.8 billion of the bonds to Thai brokerage, Country Group Securities Pcl. According to Bloomberg, another RM500 million was sold to a Singapore firm but it did not name the company.

The Edge understands that the firm is Aktis Capital Singapore.

3.    AmInvestment then immediately resold the bonds on behalf of the two companies to local investors (mainly pension funds and insurers) for between RM100 and RM105, enabling the two entities and their clients to make a big profit  — an estimated RM559 million — on a quick flip.

Country Group then instructed AmInvestment to send of US$113 million of the windfall profit to Acme Time Pte Ltd in Singapore.

US investigators have determined that Acme Time’s account in RBS Coutts was controlled by Jho Low and his associate, Eric Tan Kim Loong.

It is interesting to note that on Sept 30, 2009, Eric Tan wrote to RBS, instructing it to transfer US$20 million to Tarek Obaid’s account at JP Morgan in Switzerland (see the letter above). This transfer was carried out a day after 1MDB signed a joint venture with PetroSaudi International, pouring US$1.0 billion into it.

It appears that the US$20 million given by Jho Low to Tarek, who is a shareholder and director of PetroSaudi, was some kind of “fee” and the money came from the profits he had made from flipping the RM5.0 billion TIA bonds.

Money that 1MDB raised from that bond was used to pay the initial US$1.0 billion for the PetroSaudi JV, of which — as investigators around the world have since confirmed, as reported by The Edge and Sarawak Report in 2015 —US$700 million was moved to a Jho Low company, Good Star Ltd.

Malaysian investigators are now looking into why AmInvestment  had not sold the bonds directly to the eventual buyers — insurance companies and pension funds — but instead, facilitating Country Group and Aktis Capital to make large profits through a quick flip.

They are also finding out who in AmInvestment approved the transfer of the US$113 million to Acme Time in Singapore.

Who are Country Group and Aktis Capital and their clients?

This explains why Jho Low had  chosen Country Group as the securities firm  to buy and do a quick flip of the bonds.

Aktis Capital is an investment advisory and asset manager for high-net-worth customers. Among its partners is Malaysian Cheah Teik Seng, who interestingly was appointed to the board of Malayan Banking Bhd three months after the bonds were issued. He resigned in August 2015. Cheah had previously worked at Public Bank, ECM Libra Avenue, Merrill Lynch, Goldman Sachs, UBS and BNP Paribas.

Investigators are believed to be looking to find out who were the clients of Aktis Capital. Like Jho Low, they also made so much money from the flip at the expense of Malaysian taxpayers. Sources say they are believed to be well-connected Malaysians.

As Aktis Capital is in Singapore, Malaysian investigators will need the cooperation of the Monetary Authority of Singapore and the  city state’s Commercial Affairs Department to find out who these people are and whether they had made money inappropriately.

See also Page 53: Nazir said he ‘feared for his safety’ in The Kleptocrats