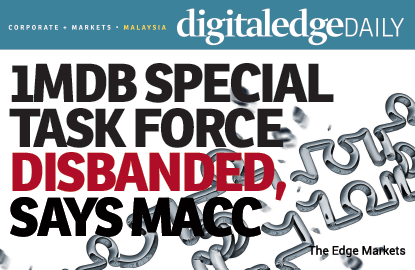 In a statement yesterday, the anti-graft agency sought to allay concerns that it had issued a statement on the RM2.6 billion channelled into Prime Minister Datuk Seri Najib Razak’s accounts without the involvement of the police and Bank Negara Malaysia (BNM), which was the original composition of the task force headed by former Attorney-General (AG) Tan Sri Abdul Gani Patail.

“The MACC did not make the announcement through the task force after the Attorney-General advised us that there was no need for a special task force.

“The investigating agencies can continue their roles based on the relevant laws,” the commission said.

It did not name which particular AG the advice came from, but Abdul Gani was replaced by Federal Court judge Tan Sri Mohamed Apandi Ali last week.

Since Abdul Gani’s removal from office as AG on July 27, the position of the task force comprising the AG, the MACC, BNM and police has been in question with critics questioning if it was still in force. In the past week, however, members of the task force were hauled up for questioning by Bukit Aman under Section 124 of the Penal Code for activities detrimental to parliamentary democracy.

MACC director (special operations) Datuk Bahri Mohamad Zin was the sixth person to be hauled up and had said that he was questioned on the alleged draft of the charge sheet against Najib which was published by whistle-blower site Sarawak Report last week.

It was reported earlier yesterday that MACC chief commissioner Tan Sri Abu Kassim Mohamed had gone on leave for a week. — The Malaysian Insider

This article first appeared in digitaledge Daily, on August 6, 2015.