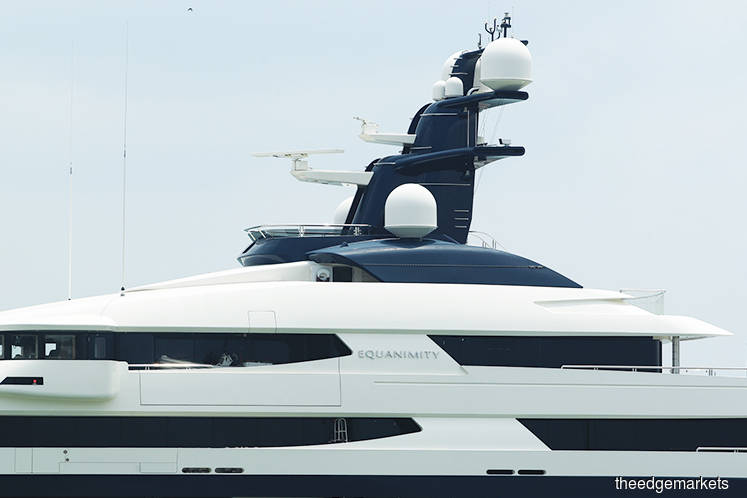 The Equanimity, claimed to be owned by 1MDB fugitive and businessman Low Taek Jho (Jho Low), arrived at about 12.30pm from Indonesia under heavy marine police escort. Reportedly worth US$250 million, the vessel, impounded in Bali since February, was scrutinised by the Attorney-General’s Chambers’ (AGC) officials upon docking at the Boustead Cruise Centre on Pulau Indah.

In a press conference after that, Jeremy Joseph, part of the team of lawyers appointed by the AGC, kept mum on the yacht’s contents, only saying “there is a mix of nice timber, marble and leather ... and it looks nice and very classy”.

A quick search on Yacht Charter Fleet, a resource website, shows the 300.2 ft Equanimity was built by Oceanco in the Netherlands at its Alblasserdam shipyard and houses, among others, an on-deck jacuzzi, a sauna, helipad, swimming pool, beach club, movie theatre, air conditioning, steam room and a Turkish bath.

“I don’t have the exact figures [but] I think it is in a few millions [a month]. Maybe about RM3 million,” Joseph said when asked how much it would cost to maintain the yacht.

Lawyer Sitpah Selvaratnam said during the two-hour inspection, the team “had to climb up to the mast of the ship ... to actually attach the warrant of arrest and the writ of summons onto the vessel” as 1MDB claimed ownership of the super yacht.

Joseph and Sitpah are part of 1MDB’s legal team.

“The Admiralty court yesterday issued a warrant of arrest against the ship ... the Equanimity. And the application for the warrant of arrest was by four plaintiffs — the 1MDB Group of Companies, 1MDB and two of its subsidiaries,” Sitpah explained.

“We had to go into the bridge of the vessel, leave a copy of the same papers in an enclosed space, which is the bridge. And we had to go see the master [of the ship] and brief him on what it means to have the vessel under arrest.”

She added that the Equanimity is now in the custody of the High Court of Malaya, specifically the Admiralty court.

“The reason for arrest is, the 1MDB Group claimed ownership to the vessel because they believe their monies had been misappropriated and used to purchase the vessel.

“So that claim is based on the allegations filed by the DoJ (the Justice Department) in America in June last year. Now, the DoJ claim is a verified complaint. It is verified against a penalty of perjury, so it carries with it a lot of weight,” she said.

As the Equanimity — now under the possession of the court — is barred from moving or conducting any activity, the legal team has given assurance that its crew members are allowed to disembark. Sitpah said the team will head to court next week to discuss the fate of the yacht and its crew. “We will be in court again sometime next week to get directions on how to maintain the vessel, what happens to the crew and so on ... and whether she (Equanimity) has to be moved.”

On how long the yacht would be docked here, Sitpah said “the ball is now in the defendant’s (registered owners of the vessel) court”.

Joseph, meanwhile, said determining Equanimity’s true owners could take between six and nine months, but this could be cut short depending on whether there is a serious contest for its ownership. He also said the new 1MDB management is seeking a court order for the sale of the yacht as it costs an estimated RM3 million per month to maintain it.

Reuters reported that the DoJ wants to suspend its legal efforts to take possession of the Equanimity, impounded as part of its anti-kleptocracy investigation into 1MDB. The DoJ said proceedings in the US courts should be suspended until it finds out what Malaysia would do with the yacht.

“The government proposes that all proceedings in this action be suspended to give the government and any interested claimant the opportunity to inquire of Malaysia through formal channels what its intentions are with respect to the defendant yacht,” it said in a court filing on Monday.

Meanwhile, Equanimity’s owners, in a separate filing with a US court early yesterday, said they are against any suspension of proceedings and disputed the handover of the yacht to Malaysia.

They submitted a petition contesting what it said is the “unlawful and extrajudicial” seizure of the yacht. Specifically, the petition questioned the lawfulness of a warrant issued by the Indonesian police to hand over the Equanimity to Malaysia.

“[The AG’s] Chambers has invoked the Admiralty jurisdiction of the High Court of Malaya at Kuala Lumpur against the yacht, and on Aug 6, 2018, the court issued a warrant of arrest against it,” Tommy said in a press statement. “Accordingly, the Equanimity is properly seized under the laws of Malaysia.”

In fact, Thomas said the government is able to take possession of the yacht as a result of the Mutual Legal Assistance Treaties between Indonesia, the US and Malaysia, activated recently and after sensitive and delicate negotiations at the highest levels of different agencies of the three countries.