1MDB board to step down as early as next month 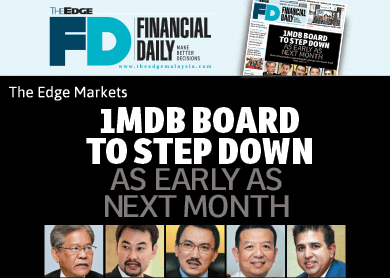 KUALA LUMPUR: In a move to mitigate the mounting criticism against debt-laden 1Malaysia Development Bhd (1MDB), the board of directors of the strategic investment fund will be made to step down as early as July, said sources with knowledge of the matter.

The sources said that there could be changes in 1MDB’s board as well as its advisory committee. “This will happen in July or August,” the sources told The Edge Financial Daily.

Another source said that not only the board of directors, but 1MDB’s advisory board will also step down en bloc. Prime Minister Datuk Seri Najib Razak is the chairman of the advisory board.

Lodin Wok is also the group managing director and deputy chairman of Boustead Holdings Bhd, and a non-executive director at Affin Hwang Capital. Shahrol Azral is the president of Malaysia Petroleum Resources Corp (MPRC) and Ismee Ismail is the managing director of Lembaga Tabung Haji.

The proposed move comes at a time when various investigations are being carried out by authorities such as the Malaysian Anti-Corruption Commission (MACC), police, the auditor-general, Public Accounts Committee and Bank Negara Malaysia on 1MDB, over possible misconduct in its operations since 2009.

According to the source, the removal of the existing board is a prelude to wind down the strategic investment fund, which has chalked up RM42 billion in debts in less than five years.

On May 29, Second Finance Minister Datuk Seri Ahmad Husni Hanadzlah said that the Finance Ministry’s (MoF) wholly-owned unit 1MDB will spin off the Tun Razak Exchange (TRX) and Bandar Malaysia into stand-alone companies, as part of its rationalisation plan to be implemented in full by early next year.

Ahmad Husni also revealed that while options are being pursued with respect to the monetisation of Edra Energy Global Bhd, the MoF will remain a key shareholder in the TRX and Bandar Malaysia.

Currently, 1MDB’s power assets are housed under Edra Energy, with an enterprise value of RM16 billion to RM18 billion. It is looking for suitors, and to date five corporations have expressed interest.

In addition, Singapore’s government-linked Sembcorp Industries Ltd is in preliminary discussions with 1MDB, while IJM Corp Bhd and Tenaga Nasional Bhd have both indicated their interest in these power assets as well.

This article first appeared in The Edge Financial Daily, on June 08, 2015.