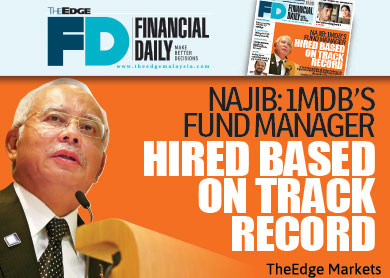 “The selection of the fund manager for 1MDB was based on criteria such as stability of the firm, its reputation, its track record in investments, its incorporated jurisdiction, its accompanying jurisdiction, [whether] it complies with the IFRS (International Financial Reporting Standards) and its fees were comparable to the market,” said Najib in a written parliamentary reply to Pandan Member of Parliament (MP) Rafizi Ramli yesterday.

Rafizi asked Najib, who is the finance minister and chairman of 1MDB, to state the criteria for appointing Bridge Partners, reportedly to be managing about US$2.3 billion belonging to 1MDB invested in the Cayman Islands, as well as the fees that were annually paid to the Hong Kong-based firm.

At the Parliament lobby yesterday, Rafizi told reporters that many people had the impression that 1MDB, as a sovereign wealth fund, manages its own money.

“As such, it is of pertinent matter that the US$2.3 billion public money that is being managed by a company (Bridge Partners) is not subject to our law and we don’t know how much and what is the arrangement like [between 1MDB and Bridge Partners].

“It is not only risky for the public, but most importantly it goes against the very principle of what a sovereign fund is all about,” he said.

“Even the Employees Provident Fund never appoints another agency as it has its own in-house investment committee and standard operating procedures. The same goes for Petroliam Nasional Bhd.”

Rafizi estimates that Bridge Partners could be earning at least 2% commission annually or about RM140 million for managing the US$2.3 billion in 1MDB offshore funds.

According to a Bloomberg report in May, the US$2.3 billion funds were invested via Brazen Sky Ltd, 1MDB’s wholly-owned unit registered in the Cayman Islands.

The report stated that although the funds were managed from Hong Kong, the custodian of the funds is a Swiss private bank. It is said the US$2.3 billion funds were invested in six unlisted open-ended funds, focusing mainly on the energy sector.

Bloomberg data also showed that the year-to-date return for all the six funds stands at 5.76%, slightly below their peers’ return of 6.39%.

A search on Bridge Partners’ website showed that the firm offers financial services to institutional and corporate clients, which include asset management, investment advisory, corporate finance, fundraising, and business consultation.

In a separate press conference yesterday, DAP national publicity secretary and MP for Petaling Jaya Utara Tony Pua said he was shocked that Goldman Sachs and 1MDB gave vastly different answers to the issue of the exorbitant “commissions, fees and expenses” detailed in the loan offer documents prepared by the investment banker.

“Who is lying about the RM1.54 billion in “certain commissions, fees and expenses” — 1MDB or Goldman Sachs?”

Pua was referring to last week’s issue of The Edge weekly, which highlighted 1MDB’s way of overpaying to raise money. The article stated that in May 2012 and March 2013, 1MDB raised a 10-year loan of US$1.75 billion and a loan of US$3 billion respectively.

Pua then questioned the shocking fact that US$196 million and US$283 million had been deducted for “certain commissions, fees and expenses”.  These amounts worked out to a staggering 11.2% and 9.4% of the funds raised.

Goldman clarified in the report that there was no commission paid to any third party and all the charges amounting to RM1.54 billion were payable to the investment bank, legal advisers and accountants taking part in the exercise, said Pua.

1MDB, on the other hand, claimed that the bulk of the RM1.54 billion charges was provided as a discount to bond subscribers, and not payable to Goldman, he said.

1MDB should prove its critics wrong by detailing the breakdown of the RM1.54 billion in “commissions, fees and expenses” paid, Pua said.

A check with the Companies Commission of Malaysia yesterday revealed that 1MDB has yet to file and submit its latest audited accounts for the financial year ended March 31, 2014. It was due to file its accounts by end-October.