This 1946 Longines is better than vintage Patek 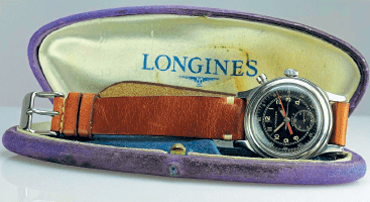 ASK some collectors and they’ll breathlessly tell you that 1930s to 1950s Longines chronographs are even better than their counterparts from such brands as Patek Philippe. So when this chrono crossed my path, I took immediate note — it’s about as rare a 20th century timepiece as you’ll find. It’s a (deep breath) monopusher with central minutes and seconds counters, an oversized stepped case, a black dial, and an unusual movement. I’ve never seen another and I don’t expect to any time soon.

There are simple vintage Longines watches, and then there’s this 1946 beauty.

It embodies some truisms of collectors hunting for vintage watches. Black dials are more desirable than white dials, to start. They’re considered sportier, and in many cases they are just rarer than lighter colours because fewer were produced. Add luminous markings and hands like you have here (radium, since the safer tritium wasn’t in use yet), and that black dial becomes even move covetable.

Larger cases are also more desirable than their smaller, more common counterparts. Typically, even sport watches and military watches in the 1940s were smaller than a dress watch would be today. That this chronograph dates to 1946 and has a 37mm case is unusual and makes the watch wear extremely well in 2015. The stepped bezel makes the watch look even larger than it is.

Then there’s the movement powering this watch. Here we have the calibre 12.68Z, instead of Longines’ best-known 13ZN chronograph movement. It’s a rare chronograph that is a monopusher (uses a single button to start, stop and reset the function) and displays both the minutes and seconds elapsed with central hands, instead of in sub-dials. This lets the dial have lots of open space, like you’d find on a time-only watch, but with all that added functionality.

Not only is the watch rare, it’s in pretty great condition. New old stock would be an overstatement, but the case is crisp, the stamped numbers are still visible on the caseback and under one of the lugs, and the dial is 100% original without any retouching.