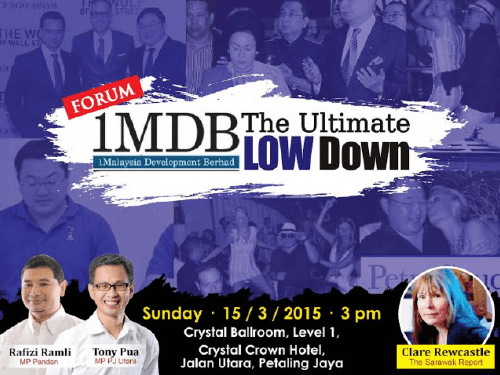 The editor of whistleblower site, Sarawak Report, told a forum yesterday that all these factors had prevented anyone from revealing more information on Jho Low and his 1MDB dealings earlier on.

“In a more open, strong, check-and-balance set up, he would have been flushed out, sorted and put in his place a long time previously,” said Rewcastle Brown, as she addressed the 1,000-plus audience at the “1MDB: The Ultimate LOW Down” forum at the Crystal Crown Hotel, in Petaling Jaya, via an online video conference on Skype.

But in Malaysia, power is too concentrated, she said, pointing to the fact that Prime Minister Datuk Seri Najib Razak controls two of the most important portfolios in the government.

“The checks and balances are eroded to the extent that the prime minister is the finance minister.

“I mean, why is it a good idea that the same person should occupy both?” said Rewcastle Brown.

She added that there was also a lack of robustness in Malaysia’s institutions, despite the huge pool of talent and manpower the country has.

“The other thing that struck me is the lack of transparency. Politicians like Tony Pua, Rafizi Ramli and Umno’s Tun Dr Mahathir Mohamad have asked valid questions and those answers should be available in public paperwork.”

Instead, she said, the questions remained unanswered and anyone who digs deeper were treated as traitors.

Referring to the mainstream media in Malaysia, she said that the “muzzled media” was overly obedient and Malaysians could only rely on blogs and online news portals to objectively discuss politicians’ actions.

“There seems to be an attitude that a strong government is a good thing, and that’s why you have over-concentration of power and weak institutions.

“But I think it’s a recipe for disaster. And that’s what 1MDB is, a very big disaster for Malaysia,” said Rewcastle Brown.

She said it would take just a “half-decent investigation” by authorities to discover 1MDB’s financial irregularities and Low’s role in it, adding that she had had her eye on the company since 2010.

“I picked up the story by asking a lot of questions and I obtained a lot of sources that allowed me to shed more light on what had happened,” she said.

Rewcastle Brown said Najib’s orders for the National Audit Department to examine 1MDB accounts is a classic move by any politician to bury a controversial issue.

She urged the public to thwart such a move by maintaining pressure on the entire scandal.

“It seems to me that it’s a classic move to kick this into the grass. An inquiry you can control and takes ages is a politician’s fallback method when they have a really awkward scandal that they need to keep a lid on for as long as possible,” Rewcastle Brown told the forum.

She predicted that the government would subsequently refuse to respond to any further questions raised on 1MDB  until the audit was completed, while at the same time exerting influence on the entire inquiry to ensure a favourable outcome.

“It’s not just a Malaysian recourse; I can think of British examples where that happened. I think pressure should be kept up. Because people who have been acting the way they did should be exposed and appropriate people should resign.”

PKR secretary-general Rafizi Ramli said the party would apply for a court injunction to prevent state agencies, such as the Employees Provident Fund (EPF), from taking up shares in 1MDB soon-to-be-listed power assets.

He told the forum that the party would not allow any more public funds to go into the controversial state investment company, which has debts of over RM42 billion.

“We will do our best to file an injunction against the EPF, or any other bodies, if there is an IPO (initial public offering), so that public funds will not be used to subscribe to the 1MDB IPO,” Rafizi said. — The Malaysian Insider