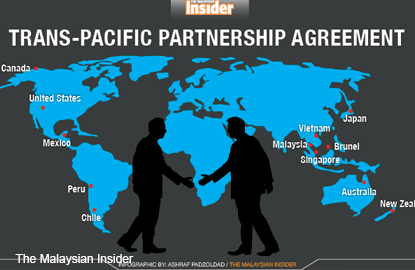 According to Jomo, the NTMs account for about 90% of the projected gains upon the implementation of the trade pact.

“I would put it to you that my concerns with the non-trade aspects of the TPP to be profoundly serious,” he said. “Advocates exaggerate benefits and downplay or ignore costs, although standard economic theory recognises that any customs union or free-trade area will see winners and losers.”

Jomo noted that studies on the TPP that were carried out by several parties using the same computable general equilibrium (CGE) model had seen differing results, which may be due to different assessments of the impact of NTMs and the lack of clarity of non-tariff barriers (NTBs).

For example, the first study by the Peterson Institute in 2012 found that there will be an additional growth of 0.4% in terms of global gross domestic production. But the second study released earlier this year by the same institution indicated a 0.5% additional growth after 15 years.

Meanwhile, the World Bank, which used the latest Peterson study, came up with an additional growth figure of 1.1%, more than double the figure outlined in the original study.

“More importantly, there was another study done by the Economic Research Service of the US Department of Agriculture. This was basically the only official study by the US government, which also used the CGE modelling.

“It found that after 10 years, there will be only [an] additional growth of 0.1%, which translates into about 0.01% per annum. However, for some reason, nobody talks about this study. Even the US government doesn’t talk about it when trying to make the case for [the] TPP,” said Jomo.

The NTMs entailed in the TPP include the extension of patents, thus limiting the possibility of producing generic drugs, which in turn translates into higher costs to purchase the drugs.

However, Jomo said the costs were instead misrepresented in the study, and was reflected in the CGE model as positives due to “a big increase in trade and services”.

“Going through their work, I found that this was how they proceeded with the study. Basically, over 90% of economic gains from the TPP can be attributed to these NTMs, directly and indirectly, in the form of increased foreign direct investment,” he said.

Jomo said the assumptions that there will be a significantly higher quantum of Malaysian investment in the more developed member countries, such as the US and Australia, were not backed by empirical evidence.

He pointed to the North American Free Trade Agreement among the US, Canada and Mexico, where Mexico did not see a substantial increase in its investment in the two other countries.

“We should be more serious in the method of doing the cost-benefit analysis of the TPP. Do not claim these exaggerated benefits from [the] NTMs and basically take very seriously whether there are going to be reductions in tariffs,” he said.

He added that there will not be much reduction in tariffs either, as Malaysia and the US had both been open economies for decades.

Meanwhile, he said the remainder of the issues he sees with the agreement are caused by NTBs, which the TPP had been silent on.

Asked about the exit clause under the agreement, which allows members to leave after six months’ notice with no repercussions, Jomo said it is not entirely a free process.

“Let’s face it. After amending 18 laws [to facilitate the implementation of the TPP], we will be stuck in a situation with those 18 sets of laws and the damage is already done. Yes, we have the right to withdraw, but it comes at a cost,” he said.

Going forward, Jomo advocated for Malaysia to be more aware and critical of what the TPP entails, and keep focused on the country’s long-term goals.

“I would suggest we be much more prudent and at the same time pragmatic. We have to keep our long-term development objectives in mind and look very carefully at whether it is worthwhile to be associated with the so-called 21st century mega trade deal.

“We have more than a year to look very carefully at this, and I do think it is still possible to be stopped in its tracks, but it will require a heroic public effort. This is why it is important for people to understand what the TPP is all about,” said Jomo.